This is a guest post for Silent London by Neil Brand, writer, composer, silent film accompanist and TV and radio presenter. Brand will accompany a screening of Alfred hitchcock’s The Ring at the Royal Albert Hall on 4 October 2015

The Ring is the only Hitchcock movie scenario that Hitch wrote himself. His highly regarded screenwriter Elliott Stannard, Hitch and Alma, his wife plotted it out together, inventing wonderful visual set-pieces such as a sideshow boxer’s rise through the ranks shown as changing fight posters over the months and the leading character’s Othello-like jealousy growing throughout a drink-fuelled dinner party.

Lillian Hall-Davis arguably precedes Anny Ondra as Hitch’s first sexy femme fatale, particularly in this film, in which she loses her head to boxing beefcake Ian Hunter despite marrying genuine athlete Carl Brisson, who is forced to fight for his wife’s affections.

I first scored this film over 10 years ago for a small jazz ensemble and have always loved its daring, its cheeky vivacity and the physicality of its fight scenes. But where did Hitch’s love of the fight game come from, and what does this eccentric film tell us about its creator?

According to John Russell Taylor:

Hitch had never felt any great interest in boxing, any more than any other sport, but he used to go quite often to the Albert Hall for the big fights, as much as anything to observe the curious rituals: the smart audience all dressed up in black tie to sit around the ring; the habit of pouring a whole bottle of champagne over a fighter to revive him at the thirteenth round. All of which contributed to the later stages of the film. The tawdry side-shows among which the early scenes are set represented another aspect of that seamy underside of show business which had always fascinated Hitch, and did give him the chance to show with vivid location reality a whole spectrum of lower-class English life which at that time had rarely if ever been seen on the screen…

The opening fairground scenes, filmed on Blackheath common, are a blast. Here is a vision of Hitch’s childhood Leytonstone, jostling, laughing, fighting, running – he obviously loves all of these characters – even the policeman.

The other element of Hitch’s character that becomes more apparent through his career is how much he loved his leading men, and in this film he really indulges the camera with views of the physicality (and physique) of his lead. Surrounded by reliable gargoyles like Gordon Harker and Harry Terry, Brisson looks gorgeous, setting the camera agog with training, massage and fight scenes the like of which had not been placed before a broad audience on-screen before. He actually had been a prize-fighter in his native Denmark between 1912 and 1915, unlike Ian Hunter, whom Hitchcock delighted in taking for a pub lunch before filming him being repeatedly punched in the stomach. Meanwhile Hall-Davis’s character is led hugely astray by Hunter, beyond coquettishness to outright betrayal of her besotted husband, so our sympathy is all with Brisson. 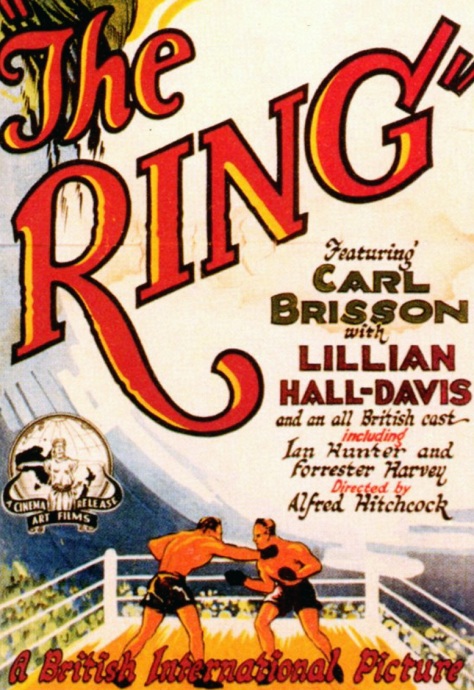 Musically, the film is unashamed guts and brawn, to me at any rate, so I give it as much speed and sexy physicality as Hitch gives Brissom. I wrote two themes for sax in my score which I look forward to dusting off again, and the seduction scenes and final fight (which takes pace in the Royal Albert Hall itself) are masterpieces of tension that are a joy to accompany. This is a grandstanding movie which invites a grandstanding score, and with a lovely piano in the hallowed Royal Albert Hall I can’t imagine a better or more inspiring setting.