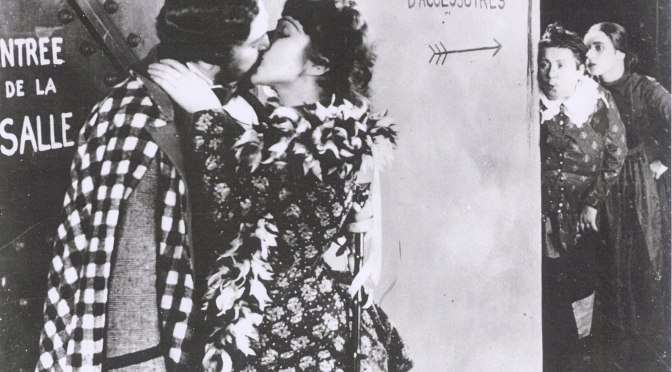 Did anyone ever tell you to beware of loose women in tight corsets? Tuesday at the Giornate was a tale of two Nanas: Jean Renoir’s acclaimed 1926 adaptation of the Emile Zola novel played in the afternoon, but in the morning we saw a recently rediscovered Italian version, starring noted diva Tilde Kassay. The Verdi audience are accustomed to beautiful temptresses by this point, so we were well judged to decided who wore it best…

First, here’s what I didn’t see. One British-Soviet curio, Three Live Ghosts, which I saw last year in Leicester and wrote about here. I also ducked out of The Guns of Loos, having seen it on the same occasion, and then a few weeks back at the BFI too. I wimped out of the morning’s western marathon too, after a couple of films. Early westerns don’t always thrill me, but in this case I had some work to do instead. And it seems that I missed out on a very impressive rattlesnake. Ah well, snakes and ladders. I have a less impressive reason for missing the last film of the day,  but I stand by it: good wine, good company, great gossip. 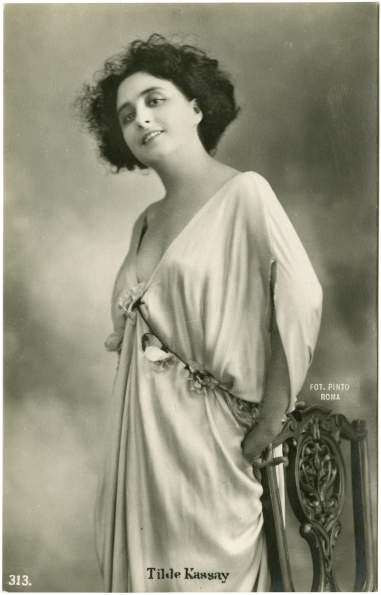 However, nothing can tear me away from my Who’s Guilty? morning treats, which have me more hooked than any soap opera. Yet again Anna Q Nilsson got married in haste (to the always-appealing, imp-faced Tom Moore, the son of the newspaper editor investigating her senator father’s corrupt affairs) and repented in haste too, as a lawsuit for abduction revealed a harsh truth about her childhood that led her straight to the brink. The brink of the lake that is. Thanks A Trial of Souls (1916) for that early morning anguish.

And while we are in the mood for high drama, today’s John H Collins movie was a doozy. With The Cossack Whip (1916) we were back in pre-revolutionary Russia, as envisaged by an American film studio, to continue a theme running through the week. Viola Dana was a young Siberian peasant on the verge of being fully radicalised when she must flee for safety to England and become a maid … to a leading Russian ballerina. Her revenge on the czarist brute who murdered her sister is served very cold. In the end, she becomes a ballerina herself in order to eventually inveigle herself into a dungeon with her arch-enemy and extract her kinky vengeance. Isn’t that always the way? The highlight was an early sequence featuring a raid on the village with sophisticated and very rapid cross-cutting, I am reliably informed that some of those shots are shot 8-12 frames long. I know, right? Dana was very good in her wide-ranging role, and I hugely enjoyed a sequence in which she performed a dance, extravagantly costumed, on top of a mirror. Good to have Neil Brand at the keys for this one too – full-flavoured action, beautifully controlled. 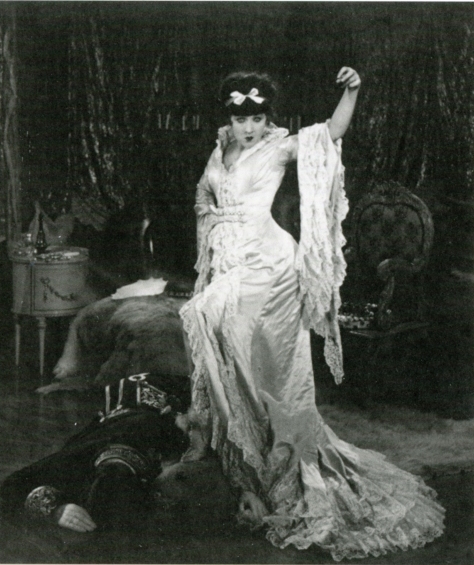 I noticed, and was pleased that I did, that there was a very similar tracking shot backwards down a dinner table in both The Cossack Whip and Renoir’s Nana. In the latter, the camera pulls back to reveal the decadence of the feast; in the former the shot expands to illustrate the solidarity displayed by the comrades in the room. One shot; two ideologies.

So, if we are picking favourites between Nana and Nana, I must go for the 1926 Renoir option. By no means the popular vote, that. The earlier Nana was gorgeous, but marred by a soft and messy print, projected so that the sides were missing, and possibly with two reels transposed. Kassay’s vibrant performance shone through such difficulties, and the film itself was elegantly staged, but it was outdone, for me, by Renoir’s witty, slightly off-kilter rendering. His wife Catherine Hessling plays Nana as a 1920s flapperesque harlot – all cupid’s bow lips, elaborate coiffure and dark-rimmed, piercing blue eyes. She had a minxy face indeed, one that always looked as if it had just been somewhere it shouldn’t. No wonder men fell for her. No wonder that having done so, they continued to fall, and fall … And I can’t lie, anything featuring the sublime genius of Valeska Gert (here three-quarters subdued as Nana’s venial maid) goes straight to the top of my list.

With my recent research, I feel somewhat of a reluctant expert in The Amoral Silent Seductress. I could teach a course in it at an evening school. Pabst must have seen Renoir’s film. And Hessling’s Nana was a sublime example of the form – modern, down-at-heel, ambitious and hedonistic. The forces that objectify her are also her only route out of her poverty trap. She has no time for love, which is her downfall as well as her only coping strategy. To see her shooting antique china ornaments with a pool cue was an anarchic delight, and a pithy statement on her relation to the patriarchal establishment, both. To see her dancing her final cancan, days away from succumbing to a fatal disease, was poignant, and grotesque, and strangely vital. Thanks due to John Sweeney for accompanying this long and diverting film.

Intertitle of the day: “Pleasure, pleasure … do you think I enjoy it?” Renoir’s Nana has had enough of the high life

Freudian imagery of the day: It is always to do with swords, really isn’t it? We have have had at least two sword-snapping degradation ceremonies this week, but the Japanese animation Namakura Gatana (11917) featured a cute “bit” in which our hero fails to sheath his blade. Turns out it is the wrong way round. And then, no, still a bit tricky. Hmm.

The award for moving the trope on goes to: The previous America-does-pre-revolutionary-Russia films this week were content to close on lovers kissing in the snow. The Cossack Whip included a final shot to seal the couple’s happiness – Darya and Sergius sail past Lady Liberty, towards Manhattan, certain of a better future.