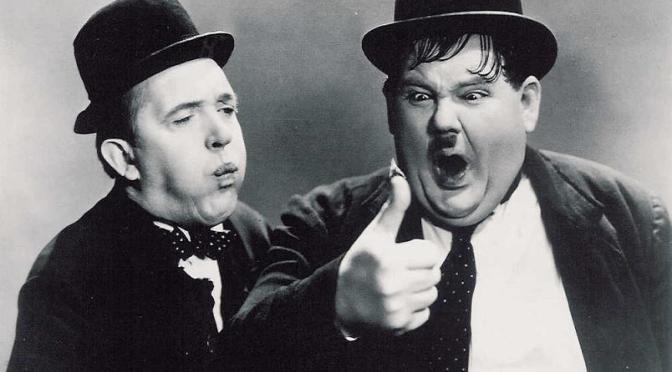 This is a guest post for Silent London by Katie Wright.

A pair of comics shuffle onstage at the Palace Theatre in Blackpool, England in June 1947. One is swimming in an oversized checked suit, dripping past his hands and towards the floor. The other is round and squat, sporting a moustache comically small for his wide face. Together, they frolic and play, every bit the annoyed schemer and his hapless buffoon. Laurel and Hardy finish their act to thunderous applause. The duo is famous all over the world, but one of them is playing to a “hometown” crowd.

The pair were best known for their feature films and silent shorts, and shared a bond as close as brothers, although Oliver Hardy hailed from Georgia while Stand Laurel remained a proud northern Briton throughout his life. While onstage Laurel played the fool, he was writer, director, and comic mastermind behind the pair’s success.

At the heart of Laurel’s stardom lies his boyhood as a young performer in Britain. Despite moving several times in his youth, the local boy who made good is revered in various “hometowns” across the north, and many avid fans and academics have sought to better understand the boy behind the man.

In Ulverston, Cumbria, where Laurel was born on 16 June, 1890, long-time admirer Bill Cubin put his lovingly assembled memorabilia collection on display in the mid 1980s, leading to what is now a full-fledged museum run by his grandson.

A statue of Laurel stands in Dockwray Square, North Shields, where he lived as a boy from 1897 to 1902. The Eden Theatre in Bishop Auckland, County Durham hosts a Laurel statue erected in 2008. There are more plaques in pubs and venues from Leicestershire to Glasgow.

University of Nottingham professor of sociology Danny Lawrence grew up in North Shields, and sees in Laurel’s story a “parallel to [his] own life”. The connections drove him to begin researching Stan Laurel, and prompted his biography The Making of Stan Laurel: Echoes of a British Boyhood.

“I was born in the same town 50 years apart, nearly 100 yards from where he lived,” explains Lawrence. “Laurel lived in North Shields during the formative years of childhood and youth. It fascinated me to begin exploring the relationship between the town and the artist.”

Stan Jefferson, later Stan Laurel, began acting young, a student of Britain’s traditional music hall and pantomime. He eventually travelled to the USA with the Fred Karno troupe alongside a young Charlie Chaplin.

“It was by chance that he got to the States. I think that chance element makes his story alluring,” says Lawrence.

“His ability was there, but there was no distinctive character until he met Hardy. He only got that chance when the Karno tour was failing, and he instead chose to stay in the USA in search of greener pastures.”

Convinced to change his surname to Laurel as “Jefferson” contained an unlucky thirteen letters, he appeared in many silent films before a fateful pairing with Oliver Hardy in 1927. The comic duo went on to act in 107 films and win international acclaim.

“In an age without radio or film, a person who ran local theatres, like Laurel’s father, would have been high profile in a town like North Shields,” he explains.

“It was a wonderful position for the young boy, watching live theatre to understand comic timing and begin to replicate it himself.”

This understanding led him to take an incredibly active role in his own jokes and acts throughout his career. This culminated in his greatest successes as a filmmaker and actor when paired with Hardy, which finally allowed him a great deal of artistic freedom within his Hollywood contract.

Lawrence explains: “Laurel played the fool – but was responsible for many of their jokes and gags. Many of their films feature sailors, ships, and ports, all of which would have been very much a part of his boyhood in a coastal town like North Shields.”

As a boy, Laurel made the particular mistake of falling into a barrel used for gutting fish. “You can see that pratfalls of this type, that falling into barrels and wells are classic Laurel and Hardy,” Lawrence points out.

“I think he saw the immense comedic potential for humour in these real-life situations that had happened to him growing up.” 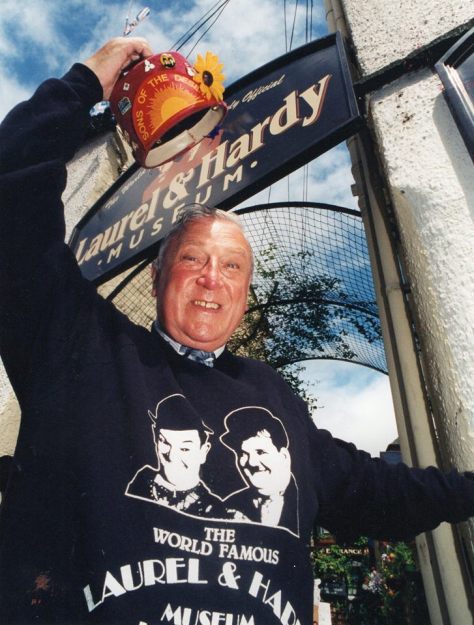 In that same way, Laurel needed Hardy both on-screen and off. Martha Yates, Ulverston resident and a regular at the Laurel & Hardy museum says: “Their relationship wasn’t put on.”

“It was just a couple of incompetent boys trying to deal with a competent world onscreen, but a true friendship off.”

For Britons, Laurel and Hardy still remain heroes, backed by a huge amount of hometown pride.

Lawrence feels a sense of personal satisfaction from his book, rather than simply academic. “My role as a local boy from North Shields has been to restore that valuable connection. It is what I always hoped to achieve.”

The community in Ulverston seem to echo the sentiment. “We are still proud, it’s a pride we have sought to keep alive for the newest generation of Ulverston,” says Yates.

“Even for Hardy, we simply adopted him from Georgia. He, along with Laurel, have done our town proud.”

2 thoughts on “Laurel and Hardy: from Ulverston to Hollywood”