There is more than one way to build a silent film festival, but perhaps some events might like to acknowledge twins – fellow fests that take the same approach to curating and commissioning archive cinema screenings. I think I have found a kindred spirit for the Hippodrome Silent Film Festival. I wonder if they would agree?

Saturday night at Hippfest was a bit of a departure – a horror double-bill. Is this the start of a new tradition? If so, it has begun well. We finished the night with Benjamin Christensen’s loopy house-of-horrors caper Seven Footprints to Satan (1929), gorgeously accompanied by a brilliant new score from Jane Gardner. The first feature was a classic: Lon Chaney as the villainous double-amputee Blizzard in the sharp shocker The Penalty (Wallace Worsley, 1920). That film is set, beautifully, in San Francisco, which was perfect – at least according to my latest theory!

Hippfest, now in its eighth year, has a lot in common with the San Francisco Silent Film Festival, which celebrates its 23rd birthday this summer. I was lucky enough to visit the San Francisco fest last year and with several enjoyable trips to Bo’ness also under my belt I think I can make a few comparisons between the two. Both are deeply connected both to international archives, and to their local communities; both put a special emphasis on live music and supporting the art of silent film accompaniment; both, of course, are based in gorgeous vintage venues (the Hippodrome in Bo’ness, and the Castro in San Francisco), and put on extra silent film events throughout the year. And when all is said, and done, both extend one of the warmest welcomes I have ever experienced at a silent movie festival, and definitely know how to let their hair down and throw a good party. (At both events I have also encountered fierce sunshine and blustery winds, but perhaps I am stretching the comparison at this point!)

So here’s to many more years of Hippfest – the precedent has been set and this thing should run and run. I want to give you a flavour of my latest visit to the Hippodrome, just because I had such a cracking weekend, but I don’t have time to go into too much detail. Here’s a whistlestop tour of my Hippfest highlights in words, pictures, tweets and general excitement. 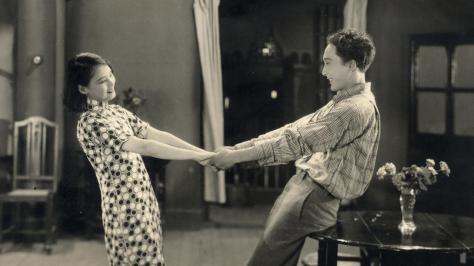 Something new for Saturday night at @HippFestScot and I liked it – a horror double-bill, kicking off with Lon Chaney, gruesome and compelling as ever in THE PENALTY, with a lush new score by Graeme Stephen for guitar and cello, commissioned for the fest

My @HippFestScot kicked off with a spellbinding evening of words, music and film dedicated to explorer, poet, botanist, filmmaker Isobel Wylie Hutchison. What a woman #hippfest #silentfilm pic.twitter.com/666hmPb03p

If you missed my Pabst's women talk yesterday, I am planning to do something with it, possibly online, possibly in video form, at some point … watch this space. pic.twitter.com/Vd6NACZcAJ

Intertitle of the festival: Surely it has to be “You bad ass!” from Striving, even if I think they really meant something like “You terrible fool!” instead.

Heroine of the festival: Superfan Nicky S, who braved snow and cancelled flights to get to the gala – from New York!

Critique-of-yours-truly of the festival: “Well, we don’t usually have female orgasms on a Thursday afternoon in Bo’ness!” You’re welcome!

Bo’ness shop of the festival:Inkspot and Silverleaf has an excellent selection of film and silent film related books in stock, including, right now, signed copies of my Pandora’s Box book and Lawrence Napper’s excellent history of late silent cinema.

Tweeter of the festival:@best2vilmabanky has the content, and the glamour, you need

My #hippfest in pictures @hippfest I left my heart in Bo’ness – again! Report now online at SilentLondon.co.uk