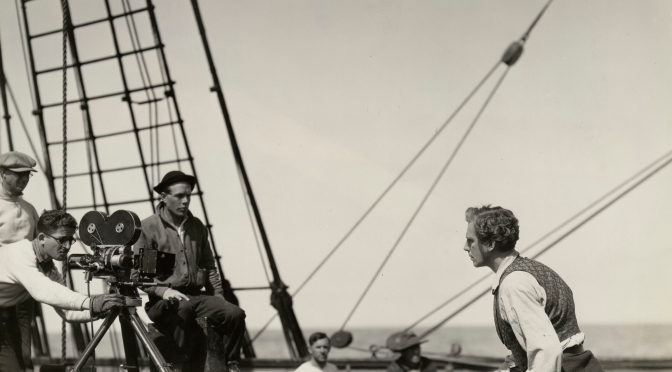 How long would you wait for a date with Lars Hanson? Maybe don’t answer that, but the past year we have spent yearning for Lars, after seeing his brooding visage on all those beautiful posters for the 2017 Giornate, has flown by. This year, the artwork celebrates the divine Pola Negri, but we’ll have plenty of time to get to her later in the week. Tonight, on the opening evening of the 2018 Giornate, we finally had our night with Lars, and Dr Philip Carli, thanks to a triumphant orchestral screening of Captain Salvation (1927). It was an invigorating start to proceedings, and just the kind of high-quality discovery that keeps us coming back (and back) to the festival.

Captain Salvation? No, I hadn’t come across it before, but it’s a wonder. Hanson plays Anson, a young vicar-in-training living in a coastal village near Boston. He loves the sea, his fiancé Mary (Marceline Day) and God. Quite possibly in that order. When a shipwreck washes up a sex worker named Bess (a wonderful Pauline Starke), Anson defies the locals to offer her charity, rather than the bum’s rush. Ostracised by the piety police, Anson and Bess take passage on a ship captained by a leering Ernest Torrence (excellent as always), which turns out not to be quite what it seemed.

This is a first-rate 1920s MGM drama, gorgeously photographed, and rather adult, with an astonishing, muscular lead performance from Hanson, who seemingly channels all outr 21st-century angst, especially in one barnstorming scene in which he unleashes fury in the rigging. Not sure I have ever seen him better. Very assured direction is by John S Robertson, making the most of the beautiful locations, and coaxing impressive performances from all and sundry, from the comic rustics in the village, to Starke’s horribly wronged woman. There’s even a fall from the crow’s nest (or near enough) that makes me ponder whether Hitchcock ever saw this one. The photography by William Daniels is exquisite, and the intertitles by John Colton are frequently brilliant. I urge you to see it, and wonder why it isn’t in heavier rotation.

If you do see it, make sure you see it with Philip Carli’s gorgeous, vivid score, which was played tonight by the Orchestra San Marco, Pordenone, with the man himself conducting. Deservedly, they brought the crowd to their feet at the finish. Bravo.

The day, and the Giornate, started much earlier than that, however, with a varied afternoon, offering a little bit of, if not everything, but several of the strands. We began with Balzac, and three short interpretations of his La Grande Bretêche story, from Italy, France and the US, all from 1909, when there must have been something sickly in the water to cause such a rage for bricking up your wife’s lover and leaving him to die slowly. In fact there was a fourth film that year, from Vitagraph, which was lost. Needless to say that across these three films there was more than enough acting to get to us through the afternoon. Certainly enough nervous energy to dismantle the brickworks … but I digress. Remarkable how similar the staging was for each one too, although they all had their little flourishes.

Now one may be forgiven for thinking that the next screening, of frontier classic The Covered Wagon, was from the Canon Revisited strand, but oh no. This is a Kevin Brownlow joint, part of a selection of films chosen by the great scholar to commemorate fifty years of The Parade’s Gone By. And what a beautiful film to choose. It has a rather loose episodic structure, but they are such diverting episodes and the film somehow gives a rich flavour of life out west that it’s a sweet relief when all is resolved and our gang can lay claim to their little corner of the American Dream. As with so many silents, the supporting players carry the day, a clutch of grizzled mugs and hair-trigger tempers offsetting our noble lovers. Oh to see that missing prairie fire that Brownlow mentions in the programme notes.

One of the strands I have been looking forward to most is that devoted to Mario Bonnard, Italian actor-turned-director. A certain little jaybird has been dropping hints since at least March that his films were excitingly wild and wildly exciting. So I settled down happily for a promising double-bill of Satana and Parsifal. Promising is the word. Today we saw Bonnard the actor in a fragment and a feature from 1912. Both films dealt with faith and temptation and wrongfooting devils who try to lure a good man to sin, one drawn from the Bible and the other from Wagner. Lots to enjoy here – vivid performances from Bonnard & co, some strong superimposition work, hefty storylines and very little subtlety – but this felt like the beginning of something rather than the full blossom. It was enough to whet my appetite though, so watch this space.

Before the night’s main feature, we enjoyed a Lotte Reiniger gem in honour of Nivea skincare, as part of the festival’s advertising strand – which has a special focus on gender. And then a real joy, a rediscovered film starring Baby Peggy, the irrepressible tomboy who celebrates her centenary this year. Our Pet is a scrappy thing, but full of charm, and lovingly reconstructed from a 9.5mm copy with Japanese intertitles.

And after Captain Salvation, the night owls were treated to John M Stahl’s delicious silent melodrama Her Code of Honor. We have plenty of time to cover the Stahls here in due course, but this was one I had seen before (and very much liked) and I was forced to retire due to reasons of being a terminal square who needs her kip. Tomorrow is another day, with no naps in it.

Oh, and before I forget – “Welcome home!”