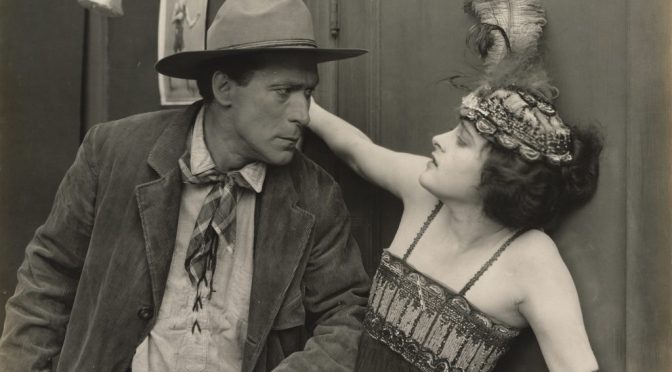 It was a day for film stars in Pordenone today: from the contract players lining up to do studio promo in this morning’s Films on Film programme to Ita Rina the Slovenian tragedienne in the Estonian drama Kire Lained at the end of the night. But when I consider all the stars shining brightly in the Verdi today, I have to confess, my heart belongs to William S.

Tonight’s evening screening was devoted to the western star William S Hart, kicking off a whole strand devoted to his peculiarly soulful machismo and hearty horsemanship. Before the feature we had two short films. One was a talkie clip from 1939 with Hart introducing his final film, Tumbleweeds (1925) and lamenting, it seemed, both the decline of the old west and the passing of his days as a western star. Only slightly less poignant was a silent fragment of Hart on a promotional tour of New York in 1919 and, so the intertitles told us, pining for the frontier lands.

Thomas Ince’s The Narrow Trail (1917) was a fabulous showcase for Hart in his heyday: a reformation tale that begins with him acting the outlaw, stealing a fine “hoss” and holding up a stagecoach and ends with him living high and clean in the mountains with a similarly born-again young lady, and yes, still that fine hoss. This film was not reinventing the western wheel but certainly refining it. The Narrow Trail is a horse opera with a high polish, and featured some really nice photography, a strong sense of dramatic pace (at least for the most part), and a truly epic, bruising, bar brawl, in a seedy dive in San Francisco. The catalogue notes that this is probably one of Hart’s best films, and it was much enhanced by Philip Carli’s expert accompaniment I am sure, so the question is: with so much more Hart on offer this week, will I remain so captivated or will the genre films appear formulaic and the star’s charms pall?

We’re going to hear a lot more from Surrey’s own actor-inventor Reginald Denny this week but this morning we began to make his acquaintance with a couple of episodes, larkily labelled “rounds”, of a boxing serial called The Leather Pushers from 1922. Denny plays a chap trying to revive his family fortunes by entering the ring, and so he occasionally fights wearing an eye mask and is known as the masked mystery millionaire – shades of Bruce Wayne. You can tell this is a lil ol’ Noo Yawk boxing drama as the intertitles are laden with slang, the episodes are peppered with broad ethnic types and it’s all enjoyably rowdy. The best element is surely Denny’s wide-boy manager, who addresses the camera directly to explain what’s going on.

That wasn’t my favourite programme of the morning though. I skipped the Canon Revisited’s mounting of Faust, which was surely the official best film in the Verdi before lunch. But I did see the Films on film programme, which was an absolute hoot. You know those endless photo spreads in old issues of Photoplay giving you a glimpse of how movies are made and how movie stars “relax off set” in increasingly wholesome ways? That’s exactly what [A Tour of the Thomas H. Ince (Ex Triangle) Studio] (1920) was. It was awesome. Lots of scenes in the studios and labs, but I preferred the off-lot material. Margaret Livingston doing bicycle tricks as part of her commute (she recommends traveling by bike to “women who would reduce”) was a treat but even better what Douglas Maclean in a skit with a cop. As Maclean is speeding to the studio, the officer pursues him on Motorcycle and eventually stops him. Not to give him a ticket, but to ask him for a job in the movies. So far so -ho-hum. Then the film shows us the cameraman and director on the back of a truck “Here’s how we filmed the auto chase”. Then we cut to another camera, showing how they filmed the filming of the chase. I tittered.

If we are counting stars today, we mustn’t neglect to mention the always-mesmerising appearance of Loie Fuller in 8fps flipbook form (these disarming discoveries appear throughout the programme), acting as the prologue for Mistinguett.

Leggy and lascivious Mistinguett was a true stage star, a darling of the French music halls, informally known as La Miss, whose charm resides rather more in charisma than conventional prettiness (aside from those celebrated mile-long pins). We saw her in two films, the short and sharp home-invasion chiller L’épouvante (Terror-stricken, 1911) and the feature-length La Glu (1913).

The feature was something to behold all right – a puzzling film in many ways and a rather bonding experience for those of us entranced in the Teatro. It started gently enough, with a doctor marrying a young bride (Mistinguett) who seemed genial enough, but was in truth an incorrigible adulteress, breaking hearts all over northern France. We soon began to groan as the plot twisted back in on itself again with each of Mistinguett’s conquests, and eventually we cheered with justice was done with a maternal mallet-strike. But we were all back in the film’s corner by then and I think most of us didn’t want it to end. One especial highpoint: Mistinguett performs a slinky, kinky Brazilian tango, known as a Maxixe. John Sweeney rose to the occasion, of course, and one wonders whether his seductive melodies didn’t enhance the leading lady’s idiosyncratic sex appeal throughout the whole endeavour. I wouldn’t be surprised.