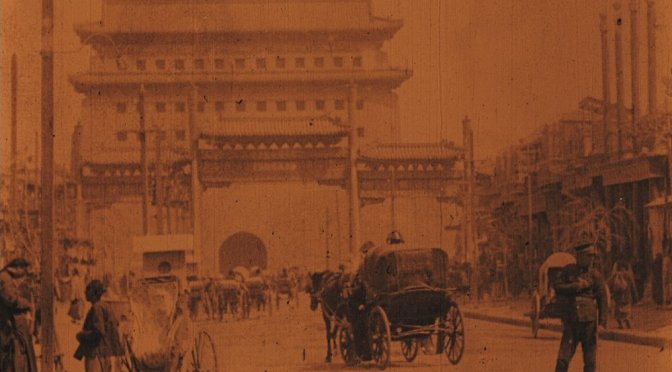 In a very welcome turn of events, the BFI releases two archive DVDs this week, both with plenty to offer the early film enthusiast. The first is the dual-format edition of Play On!, an anthology of silent Shakespeare films with newly recorded music, of which more elsewhere. The second is Around China With a Movie Camera, a disc full of surprises. 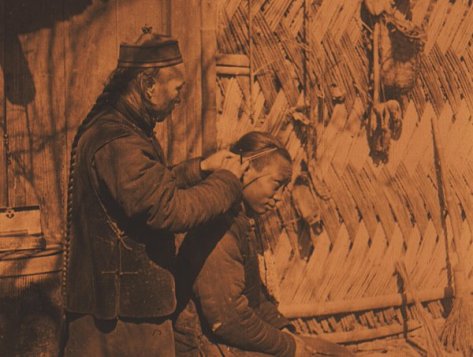 Around China With A Movie Camera is a compilation of archive film shot between 1900 and 1948, with shimmering, groovy music composed by Ruth Chan. I’ve never been to China, so I don’t bring any geographical expertise to this disc, but these are among the most bewitching early films I’ve ever seen. There are travelogues in the mix, but also newsreels, home movies, actualities, documentaries and footage shot by missionaries. Each frame is brimful of life and activity – the familiar and the unfamiliar mingled together. We begin in Beijing in 1910, with footage shot by an unknown cameraman on behalf of Charles Urban. The streets are thronged with people: workers, families, traders, drawing carts, alpacas, horses or rickshaws, carrying water or bundles of straw. The film is vividly tinted and between the blazing sunlight and the dusty road, the heat of the day burns up the screen. The locals smoke pipes, and shave each other’s heads.

A cut, and we see the same streets in 1925, the same crowds and rickshaws and market stalls. More industry here, if not quite high technology. Then, cut again, and it’s 1933. On and on, until we have travelled the country, and sped forward to 1948 and back again.

As the disc moves from fragment to fragment and place to place (the journey is plotted on a map in the booklet) a shuddering three-dimensional image of each city and province emerges. No overview, no political commentary, but a sense of place, and how those places evolve over the years. Out of 100 non-fiction films in the BFI archive, the curators have created a collage of pre-revolutionary China, a place almost gone for ever, with dragon boat races and small-scale farming. A glimpse of colonial Hong Kong in 1927 reveals the splendours of the city, but also a typhoon-struck waterfront crammed with sailboats that is now dominated by skyscrapers. And there are scenes here from as early as the very beginning of the 1900s: opium smokers, soldiers, farmers from another world. There’s a stately tour of the Grand Canal (the world’s longest man-made waterway) in 1908, another of the Yangtze River in 1930, and a trip down Shangahi’s Nankin Road in 1900. Even the later films in the collection are ripe with antique exoticism, such as An Oriental Venice (1925), a travelogue embellished with iridescent Pathé stencil colour. It’s a sugar-coated vision of Hangzhou more like a handpainted, animated postcard than a documentary.

Two full-length short films comprise the extras for this disc, Modern China (1910) and Homework and Street Scenes in China (1907). These two compilations of scenes from the last years of the Qing dynasty are far more respectful and informative than the opening intertitle “In quaint Pekin” might suggest.

Ruth Chan’s music for the films is inspired, as she explains in an illuminating essay, by the widest possible range of Chinese music: opera, folk tunes, traditional melodies, but blended with western classical influences, electronica and jazz. Among the more familiar sounds, you can hear Chinese instruments including a guzheng (a kind of plucked zither), an erhu (a fancy two-string fiddle), and two flutes, the dizi and xiao. It’s a bewildering, exciting mixture that reflects the creeping westernisation of the scenes unfolding in front of us: from motor cars to neon shop signs, to vaccinations, to British soldiers disembarking in Shanghai in 1927. 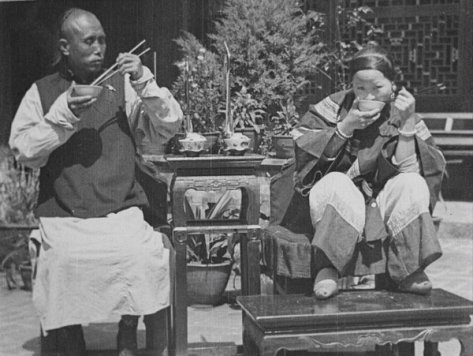 Around China With a Movie Camera will fascinate anyone familiar with this country, but it’s also a showcase for sympathetic restoration and curation of archive footage. Some of these films have been lost and found, others represents the surviving fragments of larger movies. Few of them have been widely seen for decades. And individually, these pieces of archive footage can capture a time and place, but together they evoke an entire era. When the disc ends, with a mysterious clip that may be the world’s oldest footage of China, no less, it’s a shock to be back in 21st-century London again.

4 thoughts on “Around China With a Movie Camera review: bewitching scenes from another world”