Seduced and betrayed by a scoundrel, mother to a dead child, and cast out by an unfeeling employer, “frenzied – tortured” Anna Moore (Lillian Gish) stumbles out into a blizzard and, hearing the rush of the river, on to her certain death. The melodramatic climax of DW Griffith’s old-time tearjerker Way Down East (1920) is a violent assault on the audience’s emotional wellbeing. Anna collapses in the snow, and asleep on a sheet of ice, drifts downstream towards a waterfall. Her hair and her hands dip in the icy water, icicles collect on her eyelashes, snowflakes gather on her cheeks … and all the time, just too far behind her, a true-hearted gentleman in a fur coat (Richard Barthelmess) leaps from floe to floe in pursuit, hoping to save her from death, from his own father’s coldhearted cruelty, and from her moral disgrace.

Even in 1920, this was a bit much for most filmgoers to swallow. Griffith had spent thousands on acquiring the film rights to Lottie Blair Parker’s 19th-century stage play, a huge hit in the provinces but hopelessly dated: a hokey melodrama, hinging on unlikely events and leavened with rustic humour. Even the waif to end all waifs, wide-eyed Lillian Gish, was concerned about playing naïve country girl Anna Moore, who is tricked into a mock marriage by an unscrupulous womaniser. But if they were to recoup some of that money, the cast and crew were going to have to make the cinemagoing public believe in Way Down East. And for that, Griffith needed to show them something authentic.

“Audiences want to see a real blizzard, not a sub-title with a two sentence description. If this film was going to work, the audiences wanted to see the real thing. Otherwise, whatever we did would be laughable,” worried Gish. And she was right to be concerned. At the opening night in New York, the audience howled with laughter – until the ice sequence, which is, despite the inserted footage of Niagara Falls and some canny editing, a triumph of endurance and performance rather than special effects. The sentimental appeal of Gish’s frozen tears, and the very real danger she is in during this scene would melt the hardest heart. It’s not just a nail-biting finale to a movie, it’s a spectacle of human courage – and it called for dedication above and beyond the call of cinematic duty.

A fortnight spent filming in a real blizzard and a “ninety-mile-an-hour gale” in White River Junction, Vermont, took its toll on cast and crew both. The cameramen lay down on the ice to hold the camera still, but sheltered themselves from the wind, while Gish, in a simple dress and shawl, faced the gusts until her face turned blue. When ice crystals formed on her face, Griffith had his crew film a closeup before offering her a blanket and a cup of hot tea. While it was Gish’s idea to drape her hair and hands in the river, her director gladly agreed – to the cost of her frostbite-ravaged fingers.

Barthelmess for one, was unimpressed. “I would not make that picture again for any money that a producer would be willing to pay for it,” he said, complaining of the risks he took running across the plywood ice floes. “I had on a heavy fur coat, and if I slipped, or if one of the cakes cracked and let me through, my chances would not have been good.”

For Gish, however, it was all worth it. “No sacrifice was too great to get it right, to get it accurate, true, and perfect.” Weeks prior to the shoot, Gish had been jumping into an ice bath every morning, and walking the streets without a coat in order to get used to the cold. By the time the blizzard arrived, on 6 March 1920, and filming of the scene began, Gish had already risked her health for Way Down East. But then, her devotion to her craft, and her director, was boundless. It’s still a familiar story in press interviews to read about the macho action hero who does all his own stunts, or the crash diet undertaken by an ingénue for an unmissable role, but few so publicly admit, as Gish did, the emotional consequences of suffering for her art. “When I was absorbed in one of Mr Griffith’s pictures, I underwent a period of creative fervour that to me was intense happiness,” she later said. “At the time, I hadn’t enough insight to know that I was using hard work as a smoke screen to cover my almost complete retreat from life.” Audiences believed the blizzard was real, because it was, but there was a painful authenticity also in Gish’s portrayal of a young woman putting too much trust in a man, and paying the price. 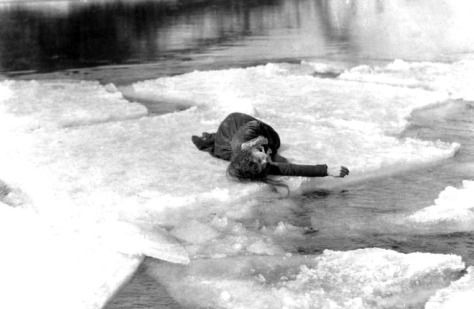 And Way Down East’s aura of authenticity paid dividends: in the shape of $4,500,000 at the box office, and an unbeatable universal appeal. Griffith had calculated that audiences would enjoy his terrifying action sequence in the same way that they thrilled to adventure serials such as The Perils of Pauline. But while Pearl White’s feisty Pauline repeatedly saved herself and others from danger, Anna was a Victorian throwback: a passive victim of the ice, suicidal, and waiting to be redeemed by the love, and the bravery, of a good man. It’s hardly the same thing, but old-fashioned or not, the cinematic strength of the ice-floe sequence allowed Way Down East’s influence to travel to the most unexpected quarters.

Years later, Soviet film director Vsevolod Pudovkin would shoot a scene inspired by this one, but with no Richard Barthelmess to save the day. At the climax of his Mother (1926), a crowd of escaped prisoners flee across melting river-ice, but both the heroine and her revolutionary son are killed by Tsarist soldiers. It’s further proof of the Griffith film’s emotional appeal that Way Down East’s heavy symbolism of ice thawing as hope enters a harsh winter landscape, its themes of maternal sacrifice and oppressive patriarchy, can be reworked into such different material. But then again, the opening titles of Griffith’s film promise a “story that brings home to men the suffering caused by our selfishness” and Pudovkin closes his with a socialist flag. Perhaps, out on the ice, they are not so very different after all.

I wrote this piece for The Big Picture magazine in 2013, but I thought that you would like to read it here, too.

7 thoughts on “Way Down East: how Lillian Gish suffered for her art”