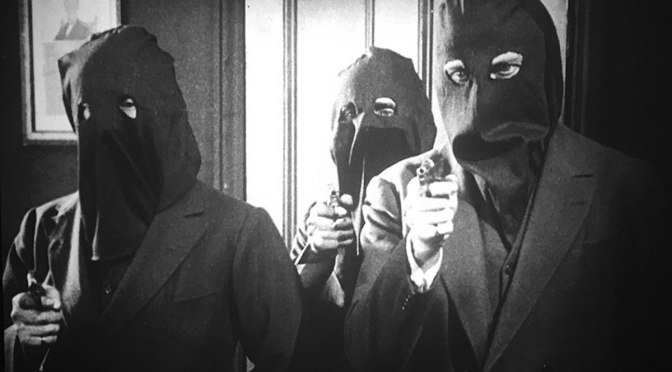 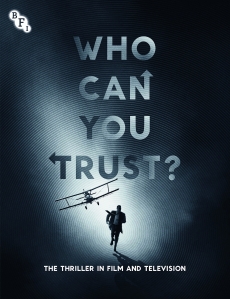 This guest post is an edited version of an article on the origins of the early British thriller by Bryony Dixon, curator at the British Film Institute. The full article appears in the BFI’s new compendium on the thriller, Who Can you Trust?,  now available in the BFI shop.

Next month’s Sunday Silent at the BFI Southbank is a rare chance to see a rare early film version of Edgar Wallace’s first great success, The Four Just Men. Released in 1921 by the Stoll Company, it was adapted by its director George Ridgewell, who worked on many of the Sherlock Holmes episodes for the same company. It’s a well-made film – nothing fancy but surprisingly competent for its year – from a well written novel, in fact a novel that is noticeably cinematic. 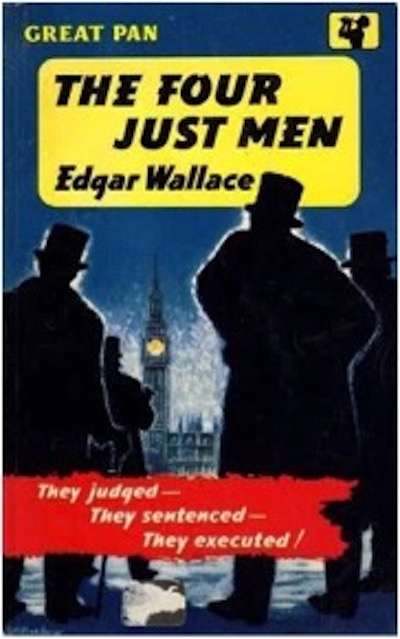 Try this passage from the opening of the original novel:

On the fourteenth day of August, 19—, a tiny paragraph appeared at the foot of an unimportant page in London’s most sober journal to the effect that the secretary of state for foreign affairs had been much annoyed by the receipt of a number of threatening letters, and was prepared to pay a reward of fifty pounds to any person who would give such information as would lead to the apprehension and conviction of the person or persons, etc. The few people who read London’s most sober journal thought, in their ponderous Athænaeum Club way, that it was a remarkable thing that a Minister of State should be annoyed at anything; more remarkable that he should advertise his annoyance, and most remarkable of all that he could imagine for one minute that the offer of a reward would put a stop to the annoyance.

“Hullo, what’s this?” asked Smiles of the Comet, and cut out the paragraph with huge shears, pasted it upon a sheet of copy-paper and headed it:

“Who is Sir Philip’s Correspondent?” As an afterthought—the Comet being in Opposition—he prefixed an introductory paragraph, humorously suggesting that the letters were from an intelligent electorate grown tired of the shilly-shallying methods of the Government.

The news editor of the Evening World – a white-haired gentleman of deliberate movement – read the paragraph twice, cut it out carefully, read it again and, placing it under a paper-weight, very soon forgot all about it.

The news editor of the Megaphone, which is a very bright newspaper indeed, cut the paragraph as he read it, rang a bell, called a reporter, all in a breath, so to speak, and issued a few terse instructions.

“Go down to Portland Place, try to see Sir Philip Ramon, secure the story of that paragraph—why he is threatened, what he is threatened with; get a copy of one of the letters if you can. If you cannot see Ramon, get hold of a secretary.”

And the obedient reporter went forth.

He returned in an hour in that state of mysterious agitation peculiar to the reporter who has got a “beat.” The news editor duly reported to the editor-in-chief, and that great man said, “That’s very good, that’s very good indeed” – which was praise of the highest order.

What was “very good indeed” about the reporter’s story may be gathered from the half-column that appeared in the Megaphone on the following day:

Threats to Murder the Foreign Secretary

Plot to Arrest the Passage of the Aliens 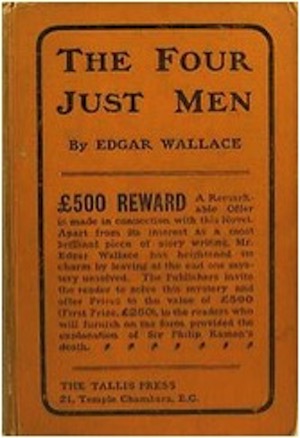 It reads like a screenplay. The ramping up in stages of tension from the total under-reaction of the old codgers of the Athenaeum, to the more informed curiosity of the Comet, to the instant action of the Megaphone creates a mental image very reminiscent of the condensed montage-opening of the standard film thriller of the 1930s and 40s. To us the vision of whirling presses and scurry of the newspaper boys may be a cliché from the opening scenes of a thousand crime films, but it was a relatively new thing in 1921, when the story was first filmed, and certainly in 1905 when it was written.

For 1905 it was, when one of the best known British thriller novels was penned by a man who would come to be known as the ‘King of Thrillers’. Edgar Wallace was a Londoner of humble origins, who overcame a modest education to become a journalist and then an astonishingly prolific writer of ingenious thrillers, plays and film scripts. His lowbrow (his word) thrillers were written to be easily readable, were hugely popular and eminently adaptable for the screen. His works spawned some 200 films and television programmes, including famously at the end of his life, the first script for King Kong (1933). He died of a chill contracted while in Hollywood working on the film for Merian Cooper.

Back in 1905 though, his first novel, The Four Just Men was an instant hit. Its success was partly due to a widespread, if ill-conceived publicity campaign which nearly bankrupted its author, but also due to its fast pace, clarity of style and satisfying construction. The story concerns a group of vigilantes, effectively international terrorists, whose aim is to prevent a piece of extradition legislation going through Parliament by threatening to kill its principal champion, the foreign secretary. The 1921 film version tones down the terrorism and makes the foreign secretary an industrialist famed for his exploitative methods. This removes the moral ambiguity about the character by making him simply a baddie rather than the supporter of a bill (for which arguments could be made for or against) and thus also the ambiguity about the actions of the Four Just Men. 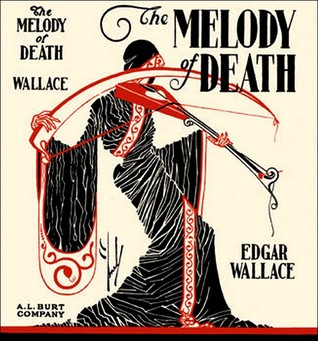 An astonishing work-horse, Wallace dictated his novels, which were sometimes written in days with no rewrites. As well as writing novels, plays and journalism, he was involved in the film business from as early as 1915 – a script for Nurse and Martyr about the execution of Edith Cavell – and he also adapted his own work. In the 1920s he was a founder chairman of British Lion and directed several films himself. Some of his more ingenious situations were Melody of Death (1915) filmed by Stoll in 1922 about a man who thinks he is dying of cancer and turns to crime to provide for his wife after his death (the Breaking Bad of its day?), The Green Rust in 1919 about the an attempt to starve the world by bio-terrorists, filmed as The Green Terror in 1920 and The Man Who Bought London (1915) filmed the following year, which imagined a syndicate of millionaires who buy up London property for the good of the people – replacing slums with baths, playground , a crèche, a hospital and a library. And all this before producing his better-known titles like The Ringer, The Crimson Circle or The Squeaker, which were adapted as early sound films and then again in the 1950s as hugely popular German Krimi films.

As a thriller writer Wallace was part of a wider tradition of popular product which built on (among other sources) Conan Doyle’s Sherlock Holmes stories, largely set in London involving villains of superior intelligence, dogged Scotland Yard detectives and clever plot twists and others that dealt with conspiracy stories such as Erskine Childers’ The Riddle of the Sands (1903) and John Buchan’s The 39 Steps (1915). Later, in the 1920s, rightwing weirdo Noel Pemberton-Billing wrote a play, High Treason, which featured classic thriller fare such as international terrorists blowing up the channel tunnel and flying planes into New York skyscrapers. Maurice Elvey filmed that play in 1929.

Marie Belloc Lowndes, who’s psychological thriller, The Lodger was published in 1915 and adapted for film by Alfred Hitchcock in 1925, was another writer who like Wallace was accused of being “prolific”, for which read slapdash. But for the nascent film industry this was not a problem – in fact it almost seems to be a requirement that great thrillers were not great works of literature – they needed to be bold, pacy, popular and above all affordable. These murder-strewn dramas had a useful range, spanning romance, mystery and detection as well the more psychological suspense narratives such as The Four Just Men and The Lodger. Fast-paced action, which we think of now as an essential component of the thriller, was reserved for big-budget epics. Although British filmmakers could rarely afford it, they were certainly expressing that ambition – often making highly condensed montage sequences stand in for more extended chase scenes. The opening sequence of Blackmail (1929), one of the last British silents and one of the first sound films, is a good example, in which the film opens with a police car screeching through town on its way to arrest a suspect in the mean streets of London.

Many of you will have heard Neil Brand’s legendary score for Blackmail and all will be thrilled to know that he will be accompanying The Four Just Men at the Southbank on the afternoon of 3 December – see you there!