Why did I do this? Well partly that’s between me and my conscience. The man we know as the Little Tramp was born on 16 April 1889 and in Chaplin’s 130th anniversary year I thought it would be fun to list his feature films* in the manner of the Guardian’s Culture – ranked! series.

Sneeze and you will miss Charlie Chaplin himself in this, his final feature, which was also his only film to be made in colour. Sophia Loren plays a stateless stowaway who catches a ride to America in the cabin of a US diplomat, played by Marlon Brando of all people. Although Chaplin pokes his head round the door to play a steward, and a handful of his children have roles too, this is barely recognizable as his. The physical comedy drags, the sentiment is forced (Brando’s mumbles are the antithesis of Chaplin’s style) and it’s hard to disagree with the New York Times critic, who wrote: “if an old fan of Mr Chaplin’s movies could have his charitable way, he would draw the curtain fast on this embarrassment and pretend it never occurred”.

Chaplin had his fair share of trouble with the HUAC, and the American authorities in general – this film was made five years into his exile in Europe, and not released in the States until 1973. It follows that the raison d’etre of A King in New York is to take aim at US culture, from TV to rock’n’roll to McCarthyism. Chaplin plays a deposed European king who has fled to the Big Apple and his son Michael the earnest young communist he befriends in the city. Gleefully, at its climax, Chaplin turns a firehose on the committee themselves.

After years of making one- and two-reel comedies, Chaplin celebrated the opening of his own studio with his first three-reeler. This lightfooted comedy is about an unemployed man (the Tramp, naturally), his faithful, sausage-stealing dog Scraps (a mongrel named Mut) and a dance-hall girl played by Edna Purviance. As ever, Chaplin is the ultimate underdog, navigating a perfectly realised urban hell fraught with cruelty and despair, barely pausing to dash off some brilliantly finessed slapstick. 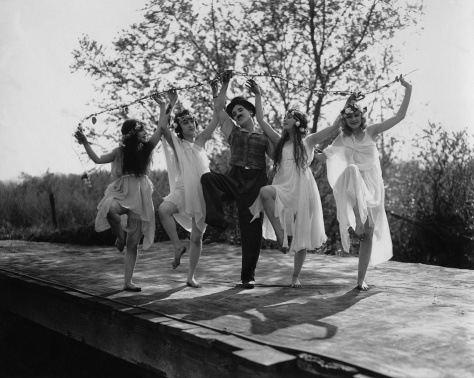 Another three-reeler here, but an early glimpse of Chaplin’s ambition and eccentricity. In Sunnyside, The Tramp is now a farm labourer, overworked and mistreated by his boss, a local preacher. The film was completed in a frantic burst of work after Chaplin suffered an uncharacteristic creative block, which may explain its disarming strangeness. It’s a rare rustic comedy that pauses for a Nijinsky-inspired nymph ballet, after all.

“To avoid any misunderstanding,” Chaplin announces in the opening card of A Woman of Paris: “I do not appear in this picture.” Subtitled A Drama of Fate, this may be an atypical film for the director, but it’s a beauty. Conceived as a showcase for Chaplin’s former lover and frequent leading lady Edna Purviance, A Woman of Paris is a romantic melodrama about an ingenue torn between two lovers: a struggling artist played by Carl Miller and a rich, hardhearted businessman played devilishly by Adolphe Menjou. Purviance excels in her role, and you should brace yourself for a heartbreaking finish. Chaplin fans shouldn’t miss this one, not least because he does appear, just for a second, as a railway porter.

In this short but well-turned four-reel feature, Chaplin pokes fun at the forces of law and order and the church both. He plays an escaped convict who disguises himself as a minister to evade the law and washes up in Devil’s Gulch, Texas where he immediately has to improvise a sermon. Edna Purviance plays the beauteous daughter of his landlady, and a cavalcade of complications ensue. In one memorable scene, foreshadowing The Gold Rush, there’s a sickly substitution of Chaplin’s famous hat for a sweet pudding, covered in cherries and cream.

Chaplin’s first feature-length film (at four reels, it’s a touch over 45 minutes long) was a riposte to those who had attacked him for not enlisting in the first world war. Chaplin’s Tramp is a private in the trenches, enduring the deprivations of military life and somehow summoning immense courage in battle. Shoulder Arms doesn’t hold back when depicting the conditions that soldiers faced at the front, but it’s also a glorious fantasy too.

Chaplin stepped away from his Tramp persona entirely with this out-of-character black comedy, inspired by bigamous serial killer Henri Désiré Landru, who was known as “The Bluebeard of Gambais”. Orson Welles had a hand in its creation, though he and Chaplin disputed the details of their collaboration. It’s a cold-hearted film, without the relief of easy humour or sweetening sentiment that audiences had come to expect. Chaplin is scarily plausible as the smoothtalking wifekiller Verdoux, and uses a chilling courtroom speech to call out the hypocrisy of warmongers: “One murder makes a villain; millions, a hero. Numbers sanctify, my good fellow!”

Not Chaplin’s final film, but his last American film and undoubtedly his swan song. The year is 1914, the date of Chaplin’s first screen appearance, and he plays Calvero, a vaudeville clown whose career has dissolved into an alcoholic decline. After he saves the life of a young dancer played by Claire Bloom, their growing friendship revitalises his confidence. There is almost unbearable melancholy in each scene of this film, but the appearance of Buster Keaton and the comic musical number he performs with Chaplin recalls the joy of their silent heyday. In fact this was the first time they had performed together on screen.

There’s no better summation of the Chaplin oeuvre than the first intertitle in this film: “a picture with a smile – and perhaps, a tear”. The brilliant child star Jackie Coogan plays an abandoned urchin adopted by the Tramp– together they try to subsist in the kind of tough city environment depicted in Chaplin films from Easy Street to City Lights. This was an intensely personal film for the director, and although it was filmed in Los Angeles, the production design recalls the Victorian London of Chaplin’s own deprived childhood. Often remembered as one of Chaplin’s most sentimental works, The Kid contains as much social critique as pathos – and fantasy too in the fanciful “Dreamland” sequence. Mary Pickford called it “one of the finest examples of the screen language”, and she would know.

Inspired by a conversation with Mahatma Ghandhi no less, this is Chaplin’s often whimsical take on the Great Depression and encroaching industrialisation. Chaplin plays a factory worker thrown into a psychological breakdown by the relentless pace of the assembly line, while Paulette Goddard appears as the now-familiar gamine foil. Chaplin intended – finally – to make this one as a talkie, but soon decided that the Little Tramp should stay silent. Therefore, Modern Times gets by with snatches of dialogue, sound effects – and Chaplin’s blockbuster song Smile. The most famous scene is the one in which Chaplin is dragged into a giant machine and wound around its cogs, but it vies for significance with the sight of Chaplin and Goddard pottering down a dusty road, as the Tramp retired for ever.

“Had I known of the actual horrors of the German concentration camps, I could not have made The Great Dictator,” wrote Chaplin in his autobiography. “I could not have made fun of the homicidal insanity of the Nazis.” And yet, this mistaken-identity comedy is Chaplin’s greatest ever statement film. The globe and barber’s chair sequences elegantly, and fearlessly skewer the egotism of tyrants. And Chaplin’s climactic speech, in which a Jewish barber impersonating the fascist leaders calls “to do away with national barriers, to do away with greed, with hate and intolerance” is one of cinema’s most stirring scenes and deathlessly pertinent. What a difference a moustache makes …

The Tramp never tugs on the audience’s heartstrings so effectively as when he tries and fails to get the girl. Which would make The Circus one of his most powerful silent films even without taking into consideration the fact that it contains two of his most exquisite gags. Chaplin plays a fugitive from the law who takes refuge in the Big Top, and the early scene in which he mimics a funhouse automaton to avoid detection is brilliant not just in conception but in execution, thanks to Chaplin’s perfect timing and meticulous movements. And if that hasn’t got you rolling in the aisles, a scene that involves a high-wire walk and a suitcase full of monkeys will.

Many of the scenes here are familiar out of context, including the sprightly and much imitated “bread roll ballet” (which Chaplin may have “borrowed” from Roscoe Arbuckle) or the scene in which the half-starved Tramp tucks into his old boot as if it were perfectly seasoned delicacy. But there’s more to The Gold Rush than gags. The glory of this film is how close Chaplin’s comedy skates to tragedy: from the hardships of the Klondike trail to the Tramp’s personal heartbreak on New Year’s Eve. Surely Chaplin’s greatest silent-era film, so watch it without the voiceover if you can, and with a crowd.

Famous for its magical final close-up, for its notoriously troubled production and because it represented Chaplin’s stubborn defiance of the coming of sound, City Lights is nothing short of a masterpiece. Here, as the hapless Tramp encounters both an alcoholic millionaire (Harry Myers) and a blind flowergirl (Virginia Cherrill), Chaplin found the most elegant expression of his genius for combining passionate sentiment with beautifully orchestrated physical comedy, not to mention class critique. Chaplin shot it entirely as a silent film and surprised his fans by composing the score himself. He liked to thinking of his directing style as a dance, which is especially evident in the fluidity and grace of City Lights.

6 thoughts on “The best and worst Charlie Chaplin films – ranked!”