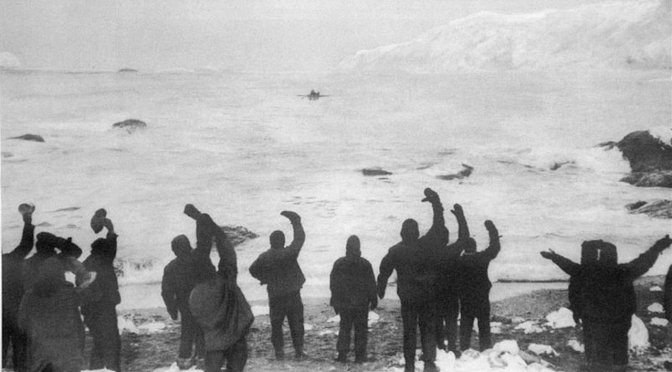 Wonderful news from a true friend of Silent London. Musician, broadcaster, writer and man of many talents Neil Brand has composed a new orchestral score for a truly staggering British silent film, South (1919) – the gripping document of Ernest Shackleton’s journey to the Antarctic, with stunning photography by Frank Hurley. It is the highlight of a BFI Southbank celebration of British explorers and the films that captured their endeavours. Here’s more about the season.

On 5 January 1922, the ‘heroic age’ of Antarctic exploration drew to a symbolic close with the death of Anglo-Irish explorer Sir Ernest Shackleton. Marking both this centenary, and that of Britain’s first attempt to reach the summit of Mount Everest, the BFI presents TO THE ENDS OF THE EARTH: EXPLORATION AND ENDURANCE ON FILM, a season at BFI Southbank throughout January, with associated film releases in cinemas and for home entertainment. There will be themed collections on BFI Player (available from 5 January) and in the BFI Mediatheque.

And yes, there will be plenty of silent film in the season:

Alongside original film records for Shackleton (SOUTH, 1919), Scott (THE GREAT WHITE SILENCE, 1924), Mallory (THE EPIC OF EVEREST, 1924) and Hillary (THE CONQUEST OF EVEREST, 1953)’s expeditions, the season features documentaries including the Oscar-nominated short, FOOTHOLD ON ANTARCTICA (1957), one of a number of colourful shorts capturing post-war Antarctic exploration, plus Werner Herzog’s Oscar-nominated feature ENCOUNTERS AT THE END OF THE WORLD (2007) and Kevin Macdonald’s BAFTA-winning TOUCHING THE VOID (2003).

But you want to know more about South. The film will be screened in a 2K digital remaster, with its original tints and tones preserved, and you will be able to watch on the biggest of big screens, at your local cinema and to own the title on DVD and Blu-ray.

The BFI remaster will premiere at the BFI IMAX on 27 January, with a live score performed by Neil Brand and the Covent Garden Sinfonia, conducted by Ben Palmer.

SOUTH is released in cinemas UK-wide from 28 January and features on a special 3-disc Blu-ray/DVD set, released on 21 February SOUTH & THE HEROIC AGE OF ANTARCTIC EXPLORATION, which collects for the first time the surviving films from the Heroic Age, sourced from archives around the world, including footage from the Amundsen, Mawson, Shirase and Shackleton expeditions from the early 20th century.

To the Ends of the Earth, January at BFI Southbank – ticket offer

2022 marks the centenary of Britain’s first attempt to summit Mount Everest. Journey from peak to Pole with the BFI’s epic ode to exploration and endurance on film, To the Ends of the Earth. Many of the films are accompanied by powerful musical scores.

To enjoy two tickets for the price of one simply quote Earth241 when booking.

• Find out more about the To the Ends of the Earth season, visit the BFI website.

• The Epic of Everest: my review.

• On 12 January I am introducing a screening of Jacques Becker’s Casque d’Or at BFI Southbank. My introduction will be pre-recorded.

• Look what’s coming up at BFI Southbank in February and March – Asta Nielsen!

• Don’t forget to vote in the annual Silent London poll!

• Silent London will always be free to all readers. If you enjoy checking in with the site, including reports from silent film festivals, features and reviews, please consider shouting me a coffee on my Ko-Fi page