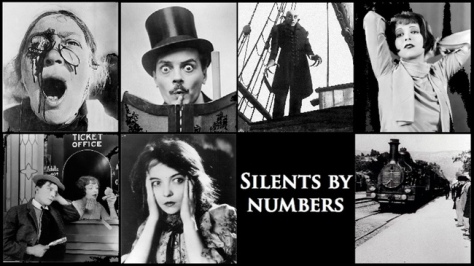 This is a guest post for Silent London by Paul Joyce, who blogs about silent and classic cinema at Ithankyouarthur.blogspot.co.uk. The Silents by Numbers strand celebrates some very personal top 10s by silent film enthusiasts and experts.

Cinematic dreams are a staple of the silent era more than any other, possibly because much of what was on screen had only previously been experienced in dreams for contemporary audiences. Now our dreams are founded on over a century of cinema and we’re so much harder to impress but … we can still dream on. Here’s a top ten of silent dreams with a couple of runners up as a bonus.

A madly inventive three minutes from George Méliès in which an old astronomer is bothered by a hungry moon as the object of his observation makes a rude appearance in order to eat his telescope.

A feast of special effects in Edwin S Porter’s cautionary tale on the matter of over-indulging in beer and cheese. Jack Brawn plays the titular fiend who suffers all manner of indignities once he staggers home to his bed, whereupon his sleep is interrupted by rarebit imps and his bed flies him high into the night sky … Proof that the whole cheese-and-dreams rumour is actually true.

In August Blom’s classic – the first Danish feature film – Olaf Fønss’ doctor dreams of walking through the sunken city of Atlantis with his dead friend, as the passenger ship he is on begins to sink. It’s either a premonition or recognition that his true feelings have been submerged … JG Ballard was obviously later inspired to write The Drowned World.

After being accidentally overdosed with sleeping draught by careless servants, Mary Pickford’s character falls into a deep and dangerous sleep …  As she hovers on the edge of oblivion the story runs parallel between the doctor trying to save her and her dreams in which those she knows are transformed in her Oz-like reverie. Sirector Maurice Tourneur excels as “the hopes of dreamland lure the little soul from the Shadows of Death to the Joys of Life”.

Douglas Fairbanks is harassed by vengeful vegetables after being force-fed too many in an effort to drive him to suicide (yep, it’s a comedy). Directed by Victor Fleming, who later returned to dreams with Dorothy and that Wizard.
END_OF_DOCUMENT_TOKEN_TO_BE_REPLACED