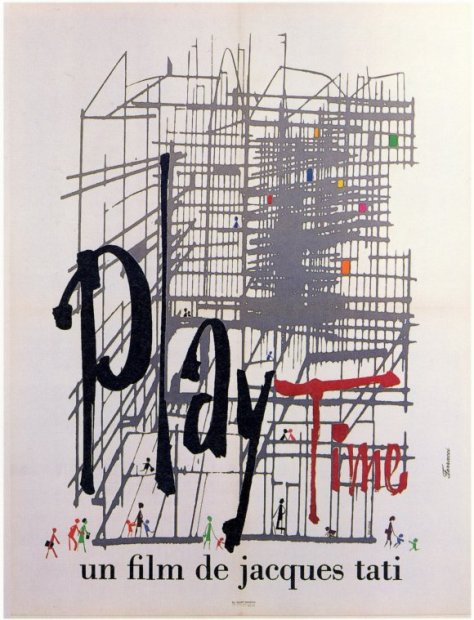 For Jacques Tati, diegetic sound is about as useful as headlights on a broom. He’d rather not illuminate anything with such a crude tool. Playtime, his masterpiece, is a work of brow-furrowing complexity in its design and structure, but a model of narrative clarity.

Amid the Babel of un-synched language spouted by its multiple characters, Tati tells us a story of a man, M Hulot, trying to negotiate a city, Paris, that doesn’t exist. Only Hulot (Tati, of course), and an American tourist, Barbara (Barbara Dennek) seem to notice that the steel and glass skyscrapers of the soaring sixties have hidden the real city, obscuring its landmarks and dividing its citizens. Tati goes to a business meeting, is diverted to a furniture show, meets an old friend who invites him home for a drink, attends the opening of a restaurant, meets a girl and loses her, all in the space of 24-odd hours.

Each twist in Hulot’s meander is a prompted by a mistake or misapprehension. His attempt to refuse to enter the restaurant shatters the door and he stumbles inside unwillingly. If I tried to explain to you why a German door salesman then ushers him further into the dining room I would expend many, many words to explain a labyrinthine incident earlier in the film that is played out in at least three languages, none of which needed subtitles at all.

Trust me, it was a wonderful moment. I felt that door salesman’s anger, his hostility, his sarcasm, his deep shame and his ingratiating warmth so deeply, because they were so strongly expressed, not because I translated “Dumbkopf!” in my head. The only skills you need to understand this film are patience and observation, which transparently makes my German GCSE barely worth the paper it is written on.