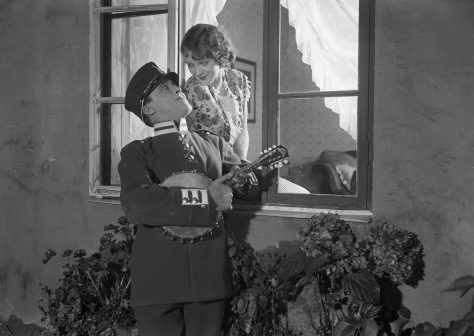 Another disappointing Anny Ondra performance – but in an unforgettable movie – two Mothers, a part-talkie that wants to be a silent, a Lamprecht with a happy ending, and Buster Keaton with a Benshi. Day six at Pordenone, coming right up.

Let us begin with Anny Ondra. It has been extremely stressful. On paper, a programme of early films made by the bewitching star of The Manxman and Blackmail, Czechoslovakia’s first true silent movie star, promised to be my festival highlight. The reality has been brutal. In these early roles Ondra has had terribly little to do and been physically encumbered by towers of curls on her head and tentlike, unflattering dresses too. She has also, I would venture, been horribly underdirected. Hitchcock may have been a brute, but he would not have stood for her gazing into the near distance, twiddling her hair, when the camera was turning. Maybe she just needed a decent part to get her teeth stuck into; maybe the Czech film industry just didn’t know what they had in her. Maybe …

Anyway, we’ve seen some enjoyable if occasionally hamfisted movies in this strand, and while there has been not as much as we hoped to see from Ondra, I am calling her sometime husband Karel Lamac as the hardest-working man in the Prague movie industry at the time. We have seen drama, action and slapstick from this chap. And he even directed some of these flicks, including today’s absurdity, which was admittedly early in his career. Otrávené Svetlo (The Poisoned Light, 1921) was a bizarre concoction almost like an adventure serial, with a meandering plot, ever-present danger and nonsensical movie-science of the highest order. Lamac stars as well as directs, in a story that contains much codswallop, but principally codswallop concerning a series of assassinations carried out via toxic lightbulbs. When the filament gets too hot, the glass shatters, releasing … poison gas! Thus, late in the movie, we have the threat of murder courtesy of a desk lamp. An anglepoisoning. Ondra appears to be tranquilised, Lamac is heaving the whole messy endeavour on his broad shoulders and, yes, the quarry sequences are quite nice. I bust a gut laughing: definitely in the so-bad-it’s-good-OK-maybe-it’s-just-bad-no-stuff-it-I’ve-not-had-this-much-fun-in-years camp. Camp being the operative word.

END_OF_DOCUMENT_TOKEN_TO_BE_REPLACED

Today at the Giornate was dominated by the early evening show – the premiere of Orson Welles’s lost-and found experiment Too Much Johnson (1938). So much so that it gets its own post to itself. For everything else from day five at Pordenone, read on …

My Wednesday began, as Tuesday had ended, on the street corners of Weimar Berlin, with Gerhard Lamprecht. Die Verrufenen (The Slums of Berlin/The Fifth Estate, 1925) was not as immaculate as Unter der Laterne, which I adored, but it was close. It’s another social problem film – the issue here being the struggles faced by prisoners on release. Our hero is a middle-class engineer emerging from a short sentence for perjury: dumped, disowned and unemployed, he finds himself suddenly among the “outcasts” in the slum districts. You may raise a cynical eyebrow and suggest that the posh boy lands on his feet and does rather better for himself than his fellow down-and-outs. Your assumptions would be correct. A (mostly) vividly drawn cast of characters, some poignant confrontations and yet more wonderful child performances tugged at my heartstrings and overcame my scepticism, though. Excellent, excellent stuff.