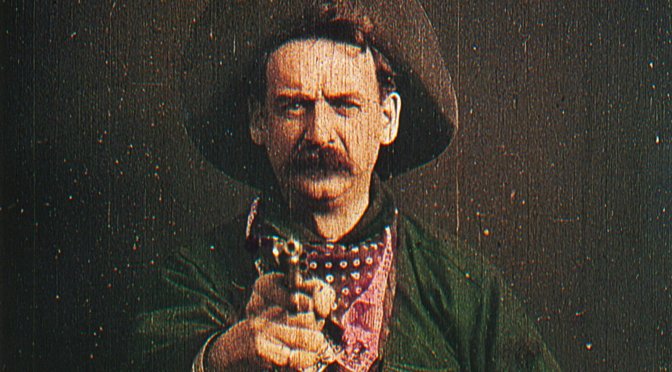 Jean-Luc Godard felt film-makers should be free to rearrange the beginning, middle and end of their scenarios. In 1903, Edwin S Porter left it to the projectionist. Scene 14 of his The Great Train Robbery, according to the sales catalogue, “can be used either to begin the subject or to end it, as the operator may choose”.

The Great Train Robbery is one of cinema’s earliest westerns, and something of a breakthrough in the development of narrative film editing. Porter’s ten-minute movie cuts between simultaneous action in different locations, more economically than in his previous work The Life of an American Fireman (1902), and the drama gains urgency from its use of location shooting, camera movement and frequent eruptions of violence. It is based loosely on Scott Marble’s 1896 play of the same name, and also, it has been suggested, a true story from 1900, when Butch Cassidy’s Hole in the Wall gang hijacked a train on the Union Pacific Railroad. The outlaws steal the mail and rob the passengers, exploding a safe and killing three men in the process. In real life, the Hole in the Wall Gang evaded capture that day, but in Porter’s film a posse of locals pursue the bandits on horseback, track them to a hideout in the woods and kill them in a shootout.

In scene 14, actor Justus D Barnes, who plays a member of the film’s bandit crew, faces the camera square-on, draws his revolver and fires six times in the direction of audience. With the gun’s chamber empty, he continues to squeeze the trigger, suggesting carelessness, desperation or an overzealous kill impulse. His impassive face suggests the last option is correct. The intended effect, according to the catalogue, which is what we have in lieu of a screenplay, is that Barnes is firing “point-blank at each individual in the audience”. It’s an especially violent act, both in real terms, and cinematic ones. The narrative momentum of the film is cast aside, then the fourth wall of the screen is broken by his gaze, only to be further ruptured by his bullets. Placed at the opening of the film, it might act as a trailer for the shoot-’em-up action to come. As a coda, it’s a warning to the audience that it’s a wild world out there, and the violence continues even after the case in the film’s title has been closed.

That’s perhaps why the version of the film that has been handed down to us places Barnes at the end, a jolt of terror as disconcerting as a hand bursting from a grave. Martin Scorsese borrowed the shot for the ending of Goodfellas (1990), submerging a trigger-happy Joe Pesci into Ray Liotta’s farewell to “the life”. In that film, the bullets can be read as an assassination threat (Liotta’s Henry Hill has ratted out his fellow wise guys to the FBI) or a guilty conscience, troubling the protagonist with memories of past bloody deeds. But just as in Porter’s film, Scorsese is addressing the audience, not the internal logic of the film. With these gunshots, Goodfellas acknowledges its place in the history of the cinema’s glamorisation of violence, a process that comes full circle when Hill’s closing monologue states that gangsters were “treated like movie-stars with muscle”.

But what does Scene 14 do for The Great Train Robbery? Porter is serving his audience the thrill of screen violence two ways. The portrait of Barnes in character (perhaps a reference to a Wanted poster) is a remnant of the Cinema of Attractions, but within a narrative film. In order to contain all the action in the frame of a mostly fixed camera, The Great Train Robbery relies on long shots, often with the outlaws’ backs to the camera, so we can see their crimes as they commit them. Scene 14 adds spectacle to the storytelling, and character too. That sales catalogue bills it as a ”life-size picture”, but on even the scantiest Nickelodeon screen, it would be far bigger than that. It gives us a long cool look at one of the outlaws before he fires, and then reveals his face again and again as the smoke from each gunshot disperses. 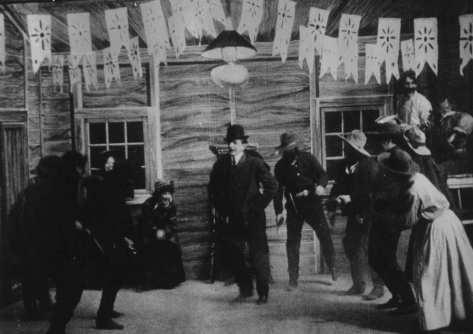 There’s another moment of spectacle in the film, a saloon scene in which the Wyoming locals perform a conventional group dance, and then a flashy “tenderfoot” routine, with “Broncho Billy” Anderson picking up his toes to avoid gunfire (there’s a nod to this Western turn in Goodfellas also, when Pesci’s character yells “I’m the Oklahoma Kid!” and shoots at Spider’s feet). The dance sequence serves as an introduction to the good guys who will chase the robbers down; a messenger interrupts the jig to share the news of the robbery.

If you compare these two pauses in the narrative pace of The Great Train Robbery, logic would dictate that Scene 14 should open the film, by way of announcing the gang. But in this early film, the trailblazer for so many movie westerns to come, narrative sense comes second to the thrill of action. The posse may have defeated the bandits, but as Barnes keeps firing the myth of the outlaw endures.

This just in on the pony express. The dudes at the Kennington Bioscope are celebrating the Silent Western with an all-day event of screenings on Saturday 11 March 2017 – hosted by Silent London’s hero of 2016, Kevin Brownlow. Now then, didn’t we tell you this was going to be a good year?

Here’s the message from the Lambeth ranchers in full.

‘Hitch up your wagon, fasten on your gun belt, saddle your horse and prepare to ride the range with the Kennington Bioscope as we explore the silent Western in the company of such Western heroes as Broncho Billy Anderson, William S. Hart, Tom Mix and – not forgetting our pistol packin’ frontier gals – Texas ‘Queen of the West’ Guinan.

Highlights will include Fred Thomson in THUNDERING HOOFS (1924) and Hart’s THE NARROW TRAIL (1917) – and will you dare ride THE DEVIL HORSE (1926)? – with the main evening event being a screening of Henry King’s classic rip roaring contemporary Western THE WINNING OF BARBARA WORTH (1926), with the popular romantic pairing of Ronald Colman and Vilma Banky, together with Gary Cooper in his first major screen role.’

END_OF_DOCUMENT_TOKEN_TO_BE_REPLACED

At this time of year, a silent film fan starts packing sun cream and sandals and contemplating a journey south to enjoy some warm weather and classic cinema in the company of like-minded souls. But there will be plenty of time to talk about Bologna later. This weekend just gone, I set forth in a southerly direction on the Bakerloo line, snaking under the Thames to the Cinema Museum in Kennington, south London. What I found there was very special indeed – and long may it continue. Everyone who was there with me will relish the idea of the Kennington Bioscope Silent Film Weekend becoming a regular thing, and for the lucky among us, an amuse-gueule for Il Cinema Ritrovato in Bologna.

We love the Kennington Bioscope, that’s already on the record, so the Silent Film Weekend is a lot more of a good thing. The team behind the Wednesday night screenings, with the help of Kevin Brownlow and a few guest musicians, have translated their evening shows into a two-day event. And with the added bonus of delicious vegetarian food courtesy of the café at the Buddhist Centre next door. It was a triumph all round.

Watching 28mm films over 100 years old,on projectors older than that at @kenbioscope for their silent film festival pic.twitter.com/tAARIQ1NXo

The programme for the weekend, which you can read here, packed in quite a few classics along less well-known films. I was more than happy to reacquaint myself with Ménilmontant (1926) and The Cheat (1915) – especially on high-quality prints projected by the genius Dave Locke and introduced by knowledgeable types including the afore-mentioned Mr Brownlow. What a joy also, to see the BFI’s Bryony Dixon proudly introduce a double-bill of H Manning Haynes’s WW Jacobs adaptations: The Boatswain’s Mate (1924) is surely destined for a wider audience. And if you haven’t seen Colleen Moore channel Betty Balfour in Twinkletoes (1926) you really are missing out.

But for this report I have decided to focus on the films that were new to me. I appreciate that’s an arbitrary distinction for other people, but this way I can fold in the element of … SURPRISE.

END_OF_DOCUMENT_TOKEN_TO_BE_REPLACED

“Horse operas” are almost as old as cinema itself. Edwin S Porter’s The Great Train Robbery is regularly claimed to be the first western – and that was made in 1903. So this special event at the Cinema Museum mines a rich seam. You’ll spend the evening in the company of BFI archivist John Oliver and pianist Cyrus Gabrysch, touring the history of westerns in the silent era, incorporating screenings of several rarely seen films:

The first part of the evening will be devoted to Western star Tom Mix, with the premiere of the MoMA’s 35mm restoration of some of his early films from the Selig Studio: The Foreman of Bar Z, comprising four 1915 shorts, and Ranch Life in the Great South West (1910), featuring Mix’s first screen appearance. The evening’s second half features the work of controversial Hollywood star J. Warren Kerrigan, with screenings of James Cruze’s celebrated epic Western The Covered Wagon (1923) and the short The Poisoned Flume (1911), directed by Allan Dwan.

Tom Mix was a hugely popular star, known as the “King of the Cowboys” who really defined our idea of a western hero. J Warren Kerrigan was another successful actor in the silent years – the controversy that surrounded him was less to do with his homosexuality than his outspoken refusal to enlist during the Great War.

The Silent Western is at The Cinema Museum on 23 June 2011 at 7.30pm. Tickets are £6.50 in advance from WeGotTickets or £8 on the door or £5 for concessions. For all the details, visit the Cinema Museum website.