If HG Wells could fix it for you to travel back to the silent era, you surely would, right? And while no doubt it would be enlightening to talk shop in the studios and editing rooms of 1920s Hollywood, it’s arguable that the real action would be in the nightclubs and hotel suites.  Take it from me, the catering would be … interesting.

Many of you will know Jenny Hammerton and Nathalie Morris. Jenny Hammerton works as a film archivist, and runs the wonderful Silver Screen Suppers site on the side. She’s researching a forthcoming book of recipes from classic film stars, you see. Nathalie Morris works at the BFI as an archive curator, and also blogs about food: the Food on Film site recreates meals from movies. She is working with Jenny on a different book, along the same lines, but dedicated to the most important meal of the day – the cocktail hour.

Such a noble pursuit deserves all our support, of course, so myself and a few other selfless souls tripped up to Nathalie’s flat on the weekend to sample some cocktails and canapés. As the evening was undertaken in the name of research, not simple fun, here is what we learned.

What we didn’t learn:

Just look at the damage we did:

Now pour yourself a drink and enjoy these snaps of the evening, and the food! 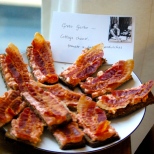 Jenny, Nathalie and Caroline raise a glass to Betty Balfour 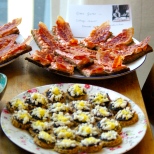 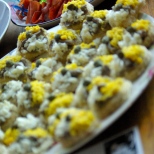 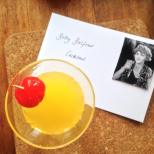 The party ended in the best way – thanks so much to our elegant and generous hosts and best of luck with the books!

Heading home from a fabulous party with some of Dorothy Sebastian's canapés on my knee. All will be revealed …