“My four-year-old thinks One Week is a Sybil Seely film that just has Buster Keaton in it.” Polly Rose said many wise things in her introductions to three restored Keaton shorts to kick off the Slapstick Festival this year, but this one really stuck with me. The annual celebration of visual comedy had a fantastic lineup of silent cinema this year, and I saw lots of it. In between chuckles, I had plenty of time to ponder the fact that that Rose’s four-year-old made a really good point.

This year, as it has done for a few years now, Slapstick Festival goes beyond the big three, or big four, or however you want to cut the comedy canon. There are programmes devoted to those performers designated “forgotten clowns” and a dedication throughout the schedule to showcasing female talent. There was a screening of suffragette comedies for example, and even an entire distaff gala on Thursday evening – a presentation of female-led movies at Bristol Cathedral, introduced by Shappi Khorsandi, running along the same lines as the Friday night gala, hosted by Paul McGann and featuring Keaton, Chaplin, Laurel and Hardy. Applause emojis all round for all of this. I absolutely loved it. 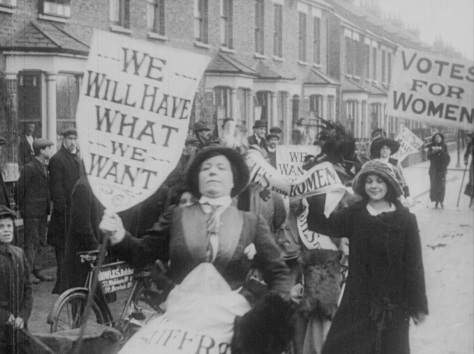 The insightful conversation between (hero) Samira Ahmed and Lucy Porter about the manifestation of the campaign for universal suffrage in silent cinema was a real highlight for me. Great to see these newsreels and comedies not just shown, but contextualised and deeply considered as well. And Porter’s line about “Darren” will stick with me for a long time. There was quite a meandering discussion in the room and the bar afterwards about the intent of filmmakers presenting such violent farces as Milling the Militants or Did’ums Diddles the Policeman. And how audiences took them! It’s hard to know the truth, but I feel that copper-bashing suffragettes and those who opposed them had both become popular caricatures by this point. So, many people watching the films, instead of looking for points of identification or moral victory, would have been merely enjoying the spectacle of a bunfight between two camps reduced to their most absurd and extreme positions – like switching on Question Time, say. Certainly one could see a few upper-middle-class white men claiming to be oppressed by intersectional feminism in these comic shorts. Though, I guess I have just proved that we all bring our own perspective to the films we watch. Make your own minds up – you can see many of these films on the BFI Player or indeed on the fine BFI DVD Make More Noise.

The Slapstick Divas gala itself was a hoot, curated by Steve Massa and introduced by Khorsandi holding forth with great charm, if a rather casual approach to names and titles, from the pulpit of Bristol Cathedral. We were treated to wonderful improvised live music from an assembly of the finest international silent-accompaniment talent too: the European Silent Screen Virtuosi featuring Günter A. Buchwald, Frank Bockius and Romano Todesco, as well as well as John Sweeney and Daan ven den Hurk. The ladies on screen numbered Mabel Normand, Gale Henry, Dorothy Devore and many more. Four of the films I had seen before (and I think mostly thanks to Massa’s curation of previous strands at Pordenone), but one was new to me: the marvellous Martha Sleeper’s only starring vehicle Sure-Mike! (1925), a department store/chase caper of remarkable vigour. I had seen Sleeper in several other films but here the joy was to see her centre-stage, skating furiously to work, or indeed, in the centre of a busy road, speeding forwards, perched on a driverless card, much like somebody or other – the name’s on the tip of my tongue … Do look out for this if you can.

If the name Martha Sleeper is obscure to most, David Robinson introduced us to an even more obscure one: Maud. Maud was a character played by Brighton-born music-hall star Aimée Campton, who made her name on the French stage at Miss Campton. She’s an introverted kind of comic, and we saw her in two comedies that cut close to the bone of the Edwardian female experience I’ll bet. The 21st-century one too. In one (Le Charme de Maud, 19193), she’s a sexually harassed secretary, dismissed because she won’t give in to her leering boss’s advances, and in another she is a two-timed wife, who has to drag up just to gain entry to the so-called Gentlemen’s Club where her husband is passing himself off as a gay bachelor.

There were two more so-called “forgotten clowns” featured in the shows that I saw. One really was new to me. Douglas Maclean, a dapper leading man in light comedies from the 1920s, with a surprisingly elastic face. As Kevin Brownlow explained in his delightful introduction, he was a big hit in the roaring years, but few of his films survive today. We enjoyed him in One a Minute (1921) – a small-town comedy about a young chap with big ideas. This is a VERY 1920s film. Douglas inherits his father’s small-town drugstore business right at the moment when it’s about to face new competition from a Goliath chainstore opening over on the other side of Main Street. The chain’s boss offers to buy him out, but our Doug will have none of it (the influence of a pretty girl with fine ideals). He decides to stay and fight. To compete with the big boys, he chances upon the rather dubious means of concocting a placebo panacea – a commingling of harmless powders that promises to cure all ills. It’s a hit, despite having no basis in medical science, and it turns out in the end that faith is the strongest drug of all. And free-market capitalism too, no doubt. This sure was sweet, for the most part, and more of a character-led jape than out-and-out slapstick, but I had a fine time with this and wondered where Maclean had been all my life. He’s most like his namesake Fairbanks, if you need a comparison, especially in his gentler fish-out of-water comedies. If you’d like to see more Maclean, or get started on this work, you’ll be pleased to know that Ben Model’s Undercrank Productions has restored and scored a selection of his films and made them available on DVD. An admirable endeavour. 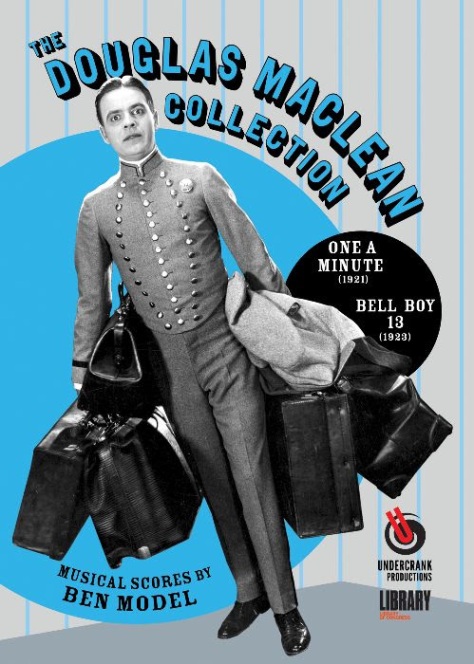 The last film I saw at the festival was a real gem, a sparkling divorce comedy called On To Reno (1928), starring another “forgotten clown”. Did you forget about Marie Prevost? I didn’t. For me she is once-seen, never forgotten, and I remember enjoying her in The Marriage Circle, Ladies of Leisure, Hands Across the Table and more. But I knew she had a sad ending to her life story, and that the good parts dried up in the 1930s. Michelle Facey of Kennington Bioscope fame treated us to fascinating, passionate and fully illustrated introduction to the Prevost story before the film, which she has long championed, screening it at the Cinema Museum and singing its praises to all the right people. And yes, she proved me wrong with a show of hands before she began talking – turns out people have forgotten about Marie. What a shame.

Any road, On To Reno was a hoot, a (surprisingly) adult, smart and heartfelt comedy where the devil was in the detail and the humour fizzed like fine champagne. Another highly recommended title, and my thanks to Michelle for her work on this film and Prevost too. Read more here. Big thanks too to John Sweeney for his fine music, which offered a complementary caper of its own.

Talking of great presenters, early Friday evening we had the joy of witnessing The Serge Bromberg Show AKA Retour de Flamme. Bromberg is the multitalented man behind Lobster Films: he restores, he presents, he narrates, he screens, he accompanies ­– he even has a tendency to set fire to scrap of nitrate to demonstrate the fragility of silent cinema, as he did this week with the glamorous assistance of Paul McGann. He showed some recently rediscovered treats – may favourite of which was the Larry Semon comedy (yes I know) The Bakery (1921), which featuring Oliver Hardy in a supporting role and a raft of gross-out slapstick involving barrels of flour, dough, pastry cream, and hardcore violence. This was a hugely inventive slapstick two-reeler, with the gags and scenarios constantly escalating, I gasped more than once. Sorry Larry – I didn’t forget you, but I did underrate you. Everything Bromberg showed was a bit of a jawdropper – he has a way of excavating some of the most bizarre corners of cinema history for our delectation. And if you’re into big names, we saw Hardy again in the recently (elaborated) restored Duck Soup (1927) with Stan Laurel. And Stan again solo in the cheeky cut-and-paste job The Hole Truth.

Both here and in another special show, Slapstick Festival showed Stan and Ollie films that weren’t part of the official Laurel and Hardy canon – lost or solo films. So are they Stan and Ollie’s films at all? Why is ­firefighting frolic Long Hose introduced as a “Jack Duffy” film rather than a “Gale Henry film”? She was wonderful in it as she was in His Wooden Wedding in the Slapstick Divas gala. We don’t need to be bound by the way films were marketed at the time, as we persist in labelling films by stars and directors rather than studio anyway. So perhaps it is time to shake up the categories all over again.

It was that comment about Sybil Seely that really got me thinking about the categories we put films into. That, and probably my highlight of the entire festival – an uncredited and unexpected appearance from Mabel Normand. Yes, fresh Mabel content! As part of his event David Robinson introduced two amiable comedies starring John Bunny from the collection of Anthony Saffrey. Now your mileage may vary but I have never found Bunny to be especially side-splitting, although I like his way with a gurn. Imagine my surprise when the film labelled Bunny in Society seemed to push the star into a supporting role while it concentrated on a group of “mean-girl” society ladies tormenting a new-in-town widow. And one of those women was unmistakably Mabel. None of us could keep our eyes off her even though she was part of the troupe and not a leading player – talk about star power. Next time this film is shown, it may well be introduced as a Mabel Normand movie – and intel from Steve Massa suggests it is in fact not Bunny in Society, but 1911’s A Widow Visits Springtown, which would make this Vitagraph comedy contemporaneous with Normand’s Biograph stint across town.

Categories shouldn’t matter but they do. Before each event, the festival played a truly excellent sting trailer, an update of the version we see every year, with Great Moments from Silent Comedy ingeniously stitched together. It’s brilliant. It’s brilliant, but it doesn’t have Mabel Normand in. Or Flora Finch. Or Marie Prevost. Or the Tilly Girls. Or Martha Sleeper, or any one of a number of great funny women or forgotten clowns elsewhere championed by the festival. Why the division? Still?

Categories beget sub-categories – which means hierarchies that keep certain films and filmmakers outside of the first division, in the lower leagues and the festival sidebars. Which confuses me, as many of my favourite screenings of the festival were not the more familiar titles that were the supposed main attractions. Well apart from the Sybil Seely film, which is still one of the greatest things ever made, on par with the Sistine Chapel, Middlemarch and rock’n’roll – however you label it.

One thought on “Shaking up the Slapstick Festival 2020”