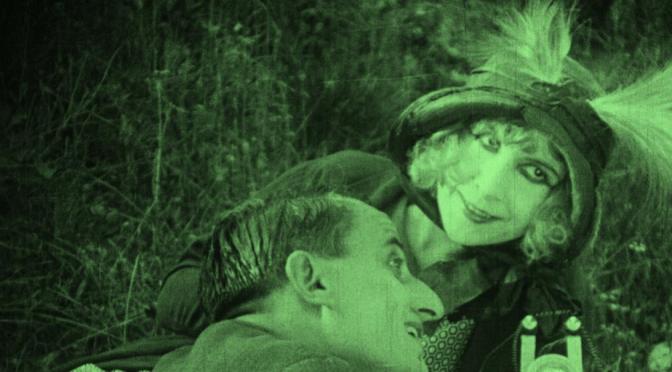 Today’s trip to Pordenone should probably have been made available on the National Health, pandemic or no pandemic. In times of stress, laughter is the best medicine, after all.

A real treat this afternoon before the films began was the masterclass of masterclasses. John Sweeney hosted a roundtable conversation between some of the Giornate’s wonderful accompanists: Philip Carli, José María Serralde Ruiz, Daan ven den Hurk and Mauro Colombis. Lots of insights here into writing, recording and improvising silent cinema scores, and I really like the way that Pordenone has incorporated live events into the online limited edition, and especially the sense of collegiate conversation, and the sharing of expertise that characterises a week in the Verdi. This was a superb example of that. Do catch up if you can, if only to understand why John and Philip have such an aversion to thinking of rabbits, or squirrels.

An excellently matched programme of short and feature this evening, introduced by Jay in front of the Duomo. Both films came from the Cineteca di Milano, where it seems they have a marvellous archive, an interactive media museum and a penchant for torture. Oh yes. I know for a fact that I was not the only film fan distraught by the disturbing archive scenes the Cineteca presented as part of their before-film reels: metres and metres of film, soaked in vats to remove the image, and then hacked into ribbons with a guillotine. Mass murder of moving images. Really should have been shown after the watershed…

First up, another kind of prologue. Ceské Hrady a Zámky (1916) promises initially to be a gentle travelogue showcasing the castles of Bohemia, but a simple plot soon emerges. An actor, the songwriter and dramatist Karel Hasler, is late for his entrance on stage and must race to the theatre taking every conceivable form of transport. A fun, and energetically staged chase film, that would be shown in the theatre prior to the star’s real entrance on stage. Neat eh?

Tonight’s feature was an Italian comedy, of the enjoyable strange kind that they did so well in the silent era. La Tempesta in un Cranio (1921) offered Kill or Cure as its English title, but I think, Storm in a Skull or suchlike would do very well. It was definitely madcap. It was directed by Carlo Campgalliani, who Jay explained was well known for Maciste adventures, and it showed. The plot of the film is something like David Fincher’s The Game (1996). A neurotic young aristo is convinced he will inherit the family madness, so his friends arrange a scare-cure that will see him having to live by his wits, without cash or friends and doubting his own reason, so he can eventually wake up and realise how good he has it. It’s an elaborate and vastly enjoyable scam, even if in real life such things would be hideously cruel.

The plot is all the wheeze of his cheeky novelist friend who compiles the caper in a book labelled “a hygienic-curative novel against neurasthenia”. It’s exactly the sort of thing Douglas Fairbanks would have starred in on the other side of the Atlantic, but perhaps even more perverse. Great use of irises and split-screens too to usher in the film’s tenuous relationship to the truth. So glad that we had Gunther Buchwald and Frank Bockius on hand to accompany his adventures on rooftops, in the underworld, with strange new inventions (“phototelephonephotography”). This was a fantastically fun night in the virtual Verdi, and as it happens, my other half’s first introduction to the joys of the Giornate. I’ve told him it is always this much of a hoot.

• Sport of the day: La Tempesta in un Cranio introduced most of us to a new leisure activity, the frankly bizarre and terrifying ball game pallone col bracciale (ball with bracelet). Check out those implements!

• Intertitle of the day: “Excuse me please, can you tell me if I’m alive?” A simple query from La Tempesta in un Cranio, a film in which nothing was simple.

• My virtual Bar Postas are not all digital. One of my favourite Pordenauts sent me an actual postcard! That’s the kind of Pordenone post that puts my efforts to shame.