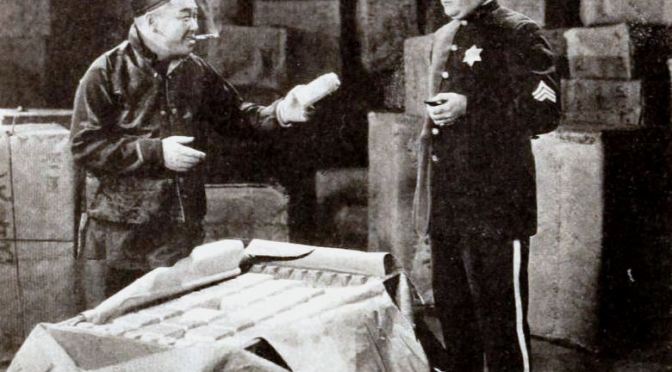 Pordenone is about halfway between Athens and London, right? So at some point on Monday I was probably there, just 37,000ft above it. Travelling cramped my style somewhat at the start of this week, but I don’t give up on silent cinema. Not ever.

It might seem perverse that I was at a open-air cinema in Athens watching Ammonite when I could have been trying to force my hotel wi-fi into rendering a masterwork of Chinese cinema on my laptop,. However, I’ll tell you this: there is a magic lantern scene in Ammonite, while made me smile, ruefully, and remember the fantastic first programme of the day, which of course was …

Day Two
The Brilliant Biograph! The name contains its own review. Many of you will have seem many of these films before, or at least heard me bang the drum for them, but still, it’s worth reminding ourselves what marvels they really are.

The Victorian and very early Edwardian world, captured on expansive 68mm film and now beautifully restored. You can keep your digital upscaling, thanks very much, my neural pathways were fully charged by gazing at these captivating scenes from Venice to Southampton. A first-rate programme put together by Frank Roumen at Eye Filmmuseum and accompanied with aplomb by Daan van den Hurk. Everything you could want from an early cinema selection and more: human life, art and travel. The past, fully present.

The feature film for today was Guofeng (1935), the final film that Ruan Lingyu made before she tragically killed herself. It’s a film about two sisters (Lingyu and Li Lili) who are in love with the same man. Known in English as National Customs, this may be a drama but it is also a propaganda film of sorts for the government’s New Life movement.

I don’t want to say too much more about it because, much as it pains me to admit this, I wasn’t able to see all of it. Suffice to say that every moment of Lingyu on screen is precious, and I wished I could have heard more of Gabriel Thibaudeau’s nuanced and shimmering score.

• Intertitle of the day: “Down with luxury and romance” – Guo Feng. The grumpiness of this felt appropriate in my own personal context. Yes, i should get over myself.

Day Three
it’s not just films at the Giornate. Not in real life, and not in virtual form either. Before’s this evening’s feature, it was possible to watch a musical masterclass from Donald Sosin (there will be more of these throughout the week) and a couple of FilmFair book presentations. Steve Massa (you should have seen plenty of him this year, co-hosting the silent comedy watch parties on Sunday with Ben Model), was talking about his excellent new book Rediscovering Roscoe: the Films of ‘Fatty’ Arbuckle (BearManor) and Terry Chester Shulman zoomed in from California to discuss his Film’s First Family: The Untold Story of the Costellos (University Press of Kentucky).

They do things right in Pordenone. And you know that means that there was a short comedy before the feature film tonight. We were treated to a Thanhouser one-reeler, Toodles, Tom and Trouble (1915), a rather terrifying chase comedy involving a dog, a baby and a hapless man (Colin Campbell) who should not have been placed in charge of even so much as a doll… Another excellent canine actor in this one: Trouble Lady the Dog.

The main feature was an American movie set in San Francisco’s Chinatown, but featuring largely Japanese and Japanese-American actors, including the wonderful Sessue Hayakawa. Where Lights are Low (1921) was thought lost, but a print was discovered in Belgrade, with Croatian intertitles and restored by the National Film Archive of Japan. It’s directed by one Colin Campbell – not the one who starred in the Thanhouser short, another man entirely.

Hayakawa plays a Chinese prince, studying and partying in San Francisco, whose sweetheart from home (American actress Gloria Payton in yellowface) is captured by human traffickers. To win her safety he must start working for a living to earn her price, but hard work is not enough. He is forced to gamble, and confront a fearsome gangster too. It’s a short, punchy melodrama, relying heavily on prejudicial ideas about the Chinese immigrant community, which looks great, although its racial politics have aged badly. Above all, it’s an excellent showcase for the dramatic skills of the great Hayakawa. And the final reel is just as thrilling, and violent, as you might expect. But with one key scene, rather coolly downplayed. Nice.

Hats off to Philip Carli, whose superb accompaniment made the most of the dramatic and perilous possibilities in tonight’s double-bill.

• Intertitle of the day: “Careful my friend. Our life could be at stake … we are in Chinatown!” Where Lights are Low. I mean, talk about “Forget it, Jake”!

• Where is your virtual Bar Posta? My between-film conversations take place on Slack, Facebook Messenger, Zoom, Twitter, Facebook and even good old email. Us silent film fans are a chatty bunch!

• Love that the festival provides post-film discussions for the films, but also I am huge fan of Jay’s filmed intros for each programme. Not just because they are valuable in themselves, but also because they give us a glimpse of the place we’re all missing – Pordenone itself. And in their own way, they feel like equivalents of the early travelogue shorts we’re watching this week. Film-nerd points to anyone who spends their time mostly checking out whether the passersby are looking at the camera or not. Or wondering how we’ll feel if we look back at these films and notice all the masks …

• Also really enjoying the archive tours before each film. I am sure this will all be digitally stored somewhere and will be a really fascinating artefact of film culture in this difficult year.