Good news for the silent film hipsters of east London: the Hackney Attic goes from strength to strength as a silent film venue. The Filmphonics group regularly take over the top of the Hackney Picturehouse for an increasingly ambitious series of silent film screenings with live music.

The next date for your diary is a showing of one of our favourites: Lon Chaney in the gorgeously grotesque The Phantom of the Opera (1925). You owe it to yourself to see this classic on the big screen!

A mad, disfigured composer seeks love with a lovely young opera singer…. Far beneath the majesty and splendour of the Paris Opera House, hides the Phantom in a shadowy existence. Shamed by his physical appearance and feared by all, the love he holds for his beautiful protégée Christine Daaé is so strong that even her heart cannot resist.

And there’s more: this screening of The Phantom of the Opera will be accompanied live by the marvellous Costas Fotopoulos on piano.

Costas is based in London and works internationally as a concert and silent film pianist, and as a composer and arranger for film, the stage and the concert hall. He regularly provides live piano improvisations to silent films at BFI Southbank and he has also accompanied films at other major British venues such as the Barbican Centre and the Prince Charles Cinema, as well as in New York, Warsaw and Northern Italy.

The great news is that you could get your hands on a free pair of tickets to this screening. Get in! To win a pair of tickets to see The Phantom of the Opera at Hackney Attic, just send the answer to this question to silentlondontickets@gmail.com by noon on Wednesday 16 July 2014. The winner will be chosen at random from the correct entries.

The Phantom of the Opera screens at 7.30pm on Sunday 20 July 2014 at Hackney Attic. To book tickets, please click here. To visit the Filmphonics Facebook page, click here.

This blog has been championing the new BFI restoration of Anthony Asquith’s dark and dangerous Underground for quite some time. The recent theatrical release packed out cinemas and the DVDs and Blu-Rays have been flying off the shelves too we hear. Quite right too, as it’s a stunning film: the twisted tale of love triangle that turns violent, with excellent use of London locations and Asquith’s artsy, expressionist lighting and jazzy editing.

But if you are sad that you missed the chance to see Underground on the big screen, turn that frown upside-down this minute. Hackney Attic’s fabulous Filmphonics folk are screening Underground  later this month, with live music provided by “one-man silent film orchestra” Igor Outkine. If you haven’t had a chance to see Outkine perform, here’s what Filmphonics have to say about his music:

Like a Russian Rick Wakeman of the button accordion, Igor switches from a conventional instrument to a Midi accordion (a veritable Tardis of an instrument, much more than it appears) from which he coaxes everything from guitar tones and saxophone solos to a James Brown back-up band. He has a unique way of interpreting every nuance of the film, which almost feels like actual dialogue at times.

That you have to see.

The even better news is that you can win a pair of tickets for this screening, just by answering a ridiculously easy question. Email the correct answer to this question to silentlondontickets@gmail.com with “Underground” in the subject line by noon on Friday 19 July 2013 for your chance to win.

The winner will be notified by email. Good luck!

Do you feel lucky, Silent Londoners? I hope so, because I am giving away tickets to watch a stone-cold Soviet classic at the marvellous east London venue Hackney Attic. In June, Filmphonics is screening Sergei Eisenstein’s stirring Battleship Potemkin, with live music from Costas Fotopoulos.

Don’t tell me you haven’t seen Potemkin: it’s a landmark of  cinema and  its violent, vital film-making is utterly unforgettable. Battleship Potemkin is a masterpiece of Eisenstein’s celebrated montage techniques, heart-in-mouth revolutionary propaganda, and in many ways a template for the best in modern action-movie spectacle. So get on it.

To win a pair of tickets to see Battleship Potemkin, simply email the answer to this simple question to silentlondontickets@gmail.com with Potemkin in the subject header by noon on Friday 14 June 2013.

Battleship Potemkin screens at Hackney Attic with live accompaniment by Costas Fotopoulos on Sunday 16 June at 7.30pm. Tickets start at £7  for members. Click here to book and for more information.

Competition time again, Silent Londoners, and this time I am giving away tickets for a night of silent film and live music at one of our favourite venues, Hackney Attic. The lucky winner can look forward to an uproarious evening, featuring Buster Keaton, Charlie Chaplin, Laurel & Hardy (in their first film together) and even Felix the Cat – plus a surprise! This latest event in the Filmphonics series has been put on by the silent film fanatics at the Lucky Dog Picturehouse. Here’s what they have to say about it:

The Lucky Dog Picturehouse specialise in providing an authentic 1920’s silent film experience, with live piano soundtrack. Collecting together 5 of the best silent film shorts ever made by some of the world’s greatest silent stars. Buster Keaton attempts to build his new flat-pack home in the stunt-filled ‘One Week’. You’ll find a love-lorn Charlie Chaplin in ‘The Pawn Shop’. Laurel & Hardy team up for the first time ever in ‘The Lucky Dog’ (featuring a dog to rival Uggie from The Artist). To balance the dog ‘Felix the Cat’ makes a madcap appearance. And the final film is “TBC” but it might involve a certain “Trip to the Moon”. All of the films will be scored by live keyboard accompaniment. Just as they were supposed to be seen. 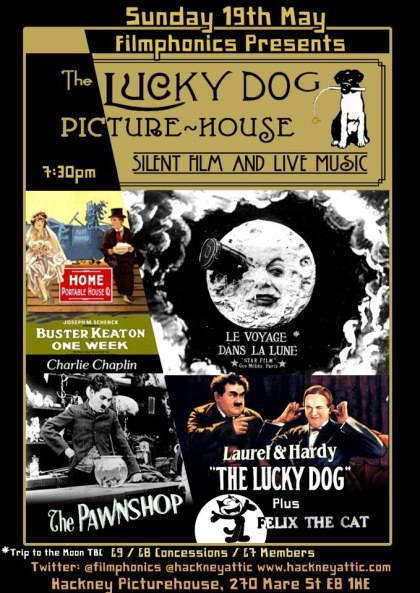 To win a pair of tickets to the Lucky Dog Picturehouse night, simply email the answer to this simple question to silentlondontickets@gmail.com with Lucky Dog in the subject header by noon on Friday 17 May 2013.

The Lucky Dog Picturehouse night at Hackney Attic is on Sunday 19 May at 7.30pm. Tickets start at 7pm for members (with £2 off if you book for The Great Gatsby the same day). Click here to book and for more information.

The Hackney Attic at London’s newest Picturehouse cinema is becoming to make name for itself as a silent film venue, with recent screenings ranging from Piccadilly to Aelita: Queen of Mars. Heartening news, then, that this trend continues with another Filmphonics presentation of a silent classic this month: Buster Keaton’s groundbreaking comedy The General, on 20 January 2013.

Surely The General needs no introduction from me: the funniest war film you’ll ever see, an astonishing technical achievement and did I mention it was hilarious too? If you need a taster though, you could do worse than this sampler from film critic AO Scott:

There’s more good news: this screening of The General will be accompanied live by the marvellous Costas Fotopoulos on piano.

Costas has now been working for many years as an improvising silent film pianist at BFI Southbank and he has also accompanied silent films at the Barbican Centre, the Prince Charles Cinema, Riverside Studios, Chelsea Arts Club among other venues, as well as scoring many silents in the London Film Festival.

The even better news is that you could get your hands on a free pair of tickets to this screening. Free. To win a pair of tickets to see The General at Hackney Attic, just send the answer to this question to silentlondontickets@gmail.com by noon on Wednesday 16 January. The winner will be chosen at random from the correct entries.

You like your silent film screenings with a touch of rock’n’roll? No problem. Filmphonics presents silent movies with live soundtracks in the quirky Hackney Attic venue at the top of the Hackney Picturehouse, and this month they’re showing an out-there Soviet sci-fi classic with a rock score.

Aelita: Queen of Mars (1924) is a futuristic fantasy, about a love affair between a Russian man and a member of Martian royalty. But there’s a twist, of course, and some outlandish headgear too. This is a unique and fascinating film, which you can read more about in this feature from The Quietus.

Aelita was an event. The novel, by Alexey Tolstoy, had been the first undisputed classic of Soviet science fiction. The release of the film was preceded by extensive ‘teaser’ campaigns in Pravda andKinogazeta (“What is the meaning of mysterious signals received by radio stations around the world? Find out on September 30!”). Alexander Exter, the film’s designer, was one of the few Russian futurists to have been on good terms with F.T. Marinetti and spent considerable time in Italy. She had taken part in the Salon des independents in Paris and socialised with Picasso and Braque. Special music had been commissioned to be performed by full orchestra in the cinema at screenings of the (silent) film. It was, perhaps, as film historian Ian Christie has argued “the key film of the New Economic Policy period.” Its release was so successful that many parents named their children ‘Aelita’ after the eponymous Martian princess. Years later, it would lend its name also to a Soviet-made analogue synth.

Minima’s score for the film is really excellent, making use of a cello as well as more traditional rock instruments to draw out the best of this wonderful film.

Aelita: Queen of Mars screens at Hackney Attic on Sunday 16 September at 7.30pm. Tickets start at £7 for members. Find out more here.

To win a pair of tickets to the Aelita: Queen of Mars screening simply email the answer to this simple question to silentlondontickets@gmail.com with Aelita in the subject header by noon on Wednesday 12 September 2012.

Glad tidings from east London. The capital’s newest cinema, the Hackney Picturehouse on Mare Street, also boasts the capital’s newest silent film screening venue. Hackney Attic hosts all kinds of live music and cinema events, scheduled by an outfit called Filmphonics. They have already dipped their toe into the silent waters with a sold-out screening of The Adventures of Prince Achmed, complete with belly dancers. Now Filmphonics are officially launching a series of monthly screenings with an event that is sure to be popular – a screening of the nightmarishly creepy The Cabinet of Dr Caligari, with live accompaniment from rock band Minima. if you’ve never seen Minima accompany a silent film, you’ve been missing out. They’re a rock band, albeit one with a cheeky cello, who specialise in the kind of spine-chilling soundscapes perfect for a film this creepy and strange.

The Cabinet of Dr Caligari screens at Hackney Attic on Sunday 22 April 2012. Doors open at 6.30p and the films begins at 7.50pm. Tickets for the screening cost £9, but less for concessions and members. Alternatively you can buy a dinner ticket, which includes the movie, a meal and a glass of wine for £20. That’s a pretty unbeatable night out, I’d say. Tickets are available online here.