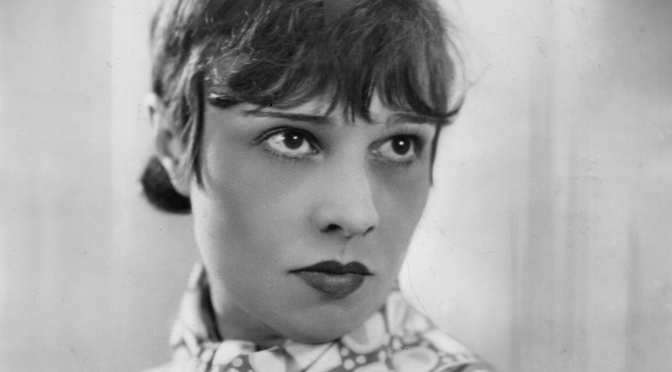 This post, in honour of Women’s History Month, is adapted from a talk I gave at the BFI Southbank recently as part of an event called Broad Strokes: Trailblazing Comedy Screenwriters. You can read a report from that event here.

Anita Loos’s family pronounced their name Lohse, but as an adult she got tired of correcting people and opted for something a little more “Loose”. It suited this true original to reinvent her own name, especially as even that sounded like a good joke. Loos was one of the greatest wits of the 20th century, who wrote one of the best modern American novels, Gentlemen Prefer Blondes – but her career kept coming back to the cinema. It’s where she started. She wrote movies – in several different ways – and she wrote some of the best books about Hollywood too. She helped the cinema grow up and she exposed many of the industry’s foibles as well. Her jokes travelled so far that even if you don’t think you know her work, you may well have been laughing at her best gags for years.

A seriously petite brunette, Loos was born in Mount Shastam California in, whisper it, 1888. She didn’t like that fact to get around and so she lied ferociously about her age, with the vanity of a movie star. Unfortunately for her, films have dates on, so to make the timeline fit, Loos claimed to have been in her early teens when she started writing movies, and thus in her own twenties during the Jazz Age. No. She was more like 24 when she started out, and while she remains one of the greatest chroniclers of the Roaring Twenties, she herself was in her 30s and 40s at the time. That’s a grand age for a wit, actually: old enough to make fun of the naivety of youth, and young enough to be aghast at the staidness of the older generation.

Loos had four main topics: sex, fashion, gossip and men. She wrote about what interested her. She was a fashion plate, a storyteller and she loved men, even though they consistently disappointed her. She was briefly married in her youth, which was a juvenile mistake – he was skint and boring – and simply her ruse to leave home. In 1919, however, she married writer-director John Emerson and she stayed married to him until he died in 1956. She was besotted with him at first, but he soon let her down, reinforcing her opinion that sex was some sort of absurd cosmic joke played on unsuspecting mortals.

They worked together, which is to say, as she recalled it, she worked while he lay in bed watching her. “I had set my sights on a man of brains, to whom I could look up,” she later said, “but what a terrible let down it would be to find out that I was smarter than he was.” He was a philanderer, a malingerer and took most of the credit and at least half the money for their collaborations. Sam Goldwyn said “Emerson was one of those guys that lived by the sweat of his frau” and Loos’s friend Charles Lederer called him “Sweet Mister E of Life”. One time, it seems, he tried to strangle her. But he did not write Gentlemen Prefer Blondes, so we won’t mention him again unless we absolutely have to. END_OF_DOCUMENT_TOKEN_TO_BE_REPLACED