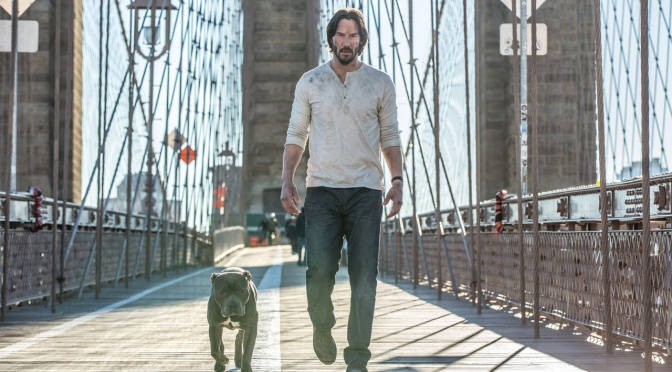 If you want to see Buster Keaton on the big screen next weekend, go see John Wick 2 – but be careful not to blink. The action sequel opens in New York, with a Buster Keaton movie being projected on the external wall of a building. Why? “We want to let you know we’re having fun and we stole this all from silent movie people,” says director Chad Stahelski.

As soon as you have clocked, and cheered, the reference, the action has begun, down on the streets with a blistering collision between a motorcycle and a car. The movie’s opening sequence is very funny, hugely violent, and actually a pretty clever example of how to cover a lot of exposition (for those like me who hadn’t seen the first film) with a minimum of dialogue. All you need to know about the plot, and all I can really tell you, having seen the film, is that John Wick (played by Keanu Reeves) is a hitman, with a revenge motive. The film takes him from New York to Rome and back again – and en route, he kills a hell of a lot of people.

The nods to silent cinema don’t stop with the Keaton film, though*. One of the movie’s key shootouts takes place in a hall of mirrors. Very Enter the Dragon (1973), a little The Lady from Shanghai (1947). But surely Chaplin got there first with The Circus in 1928. Despite his smart suit, John Wick is essentially a tramp like Charlie – homeless and friendless, he’s a hired hand for a shadowy and moneyed elite, and he’s happiest trudging about with his dog by his side. The film reveals a fearsome network of derelicts, in fact, assassins just like Wick who pass through the city unseen. When Wick puts on his fancy togs and goes to a party his presence is disquieting – he’s not one of the in-crowd, but someone they have hired to do their dirty work. That tension is the source of many of Chaplin’s best gags.