If you want to see Buster Keaton on the big screen next weekend, go see John Wick 2 – but be careful not to blink. The action sequel opens in New York, with a Buster Keaton movie being projected on the external wall of a building. Why? “We want to let you know we’re having fun and we stole this all from silent movie people,” says director Chad Stahelski.

As soon as you have clocked, and cheered, the reference, the action has begun, down on the streets with a blistering collision between a motorcycle and a car. The movie’s opening sequence is very funny, hugely violent, and actually a pretty clever example of how to cover a lot of exposition (for those like me who hadn’t seen the first film) with a minimum of dialogue. All you need to know about the plot, and all I can really tell you, having seen the film, is that John Wick (played by Keanu Reeves) is a hitman, with a revenge motive. The film takes him from New York to Rome and back again – and en route, he kills a hell of a lot of people.

The nods to silent cinema don’t stop with the Keaton film, though*. One of the movie’s key shootouts takes place in a hall of mirrors. Very Enter the Dragon (1973), a little The Lady from Shanghai (1947). But surely Chaplin got there first with The Circus in 1928. Despite his smart suit, John Wick is essentially a tramp like Charlie – homeless and friendless, he’s a hired hand for a shadowy and moneyed elite, and he’s happiest trudging about with his dog by his side. The film reveals a fearsome network of derelicts, in fact, assassins just like Wick who pass through the city unseen. When Wick puts on his fancy togs and goes to a party his presence is disquieting – he’s not one of the in-crowd, but someone they have hired to do their dirty work. That tension is the source of many of Chaplin’s best gags.

If that weren’t enough to warrant further investigation, the film’s poster is an unlikely homage to a Harold Lloyd publicity shot. Check it out: 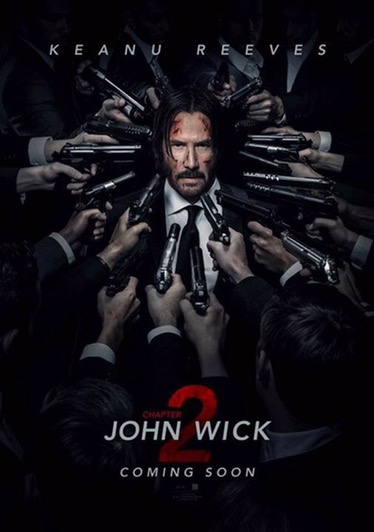 Among Wick’s rival assassins there is a silent character, played by Ruby Rose, who speaks only a few words of sign language in the film, but has mastered the art of pouting while shooting. Wick himself says little more, and Reeves is clearly aspiring to a certain Keatonesque stone face. To be honest, it comes across more as brow-furrowed seriousness than cool, elegant passivity – essentially he’s a cold-blooded killer who hates everyone, and it shows, as it should. There is one character who excels at deadpan humour – the hotel concierge played by Lance Reddick has it nailed, and I’d love to see him do more comedy.

There is a silent-era influence to the action scenes though, a style that has been kept alive by devotees such as Jackie Chan. The fight scenes, which account for most of the screen time, are often shot wide, with maybe two cameras, which is restrained by the standards of modern Hollywood action films. John Wick 2 has far more complex choreography than La La Land, and this is how they show it off to its best advantage. Although the edits are fast, and some of the sequences rely on the Steadicam style that recalls first-person shooters rather than staged action, there is some solid, old-fashioned stunt work here. When Wick gets into it with an assassin called Cassian (played by former rapper Common) in Rome, their violent duet involves weaving between parked cars and an elongated fall downstairs that is by far the film’s best comic action stunt. Elsewhere, the biggest laughs come from one-liners, and not during but in between the action, which is gory, unrelenting and only a source of the very blackest humour.

The reason the fight work is so impressive is that director Stahelski is a former stunt co-ordinator, so he takes these things seriously. Back in the day, silent movie stars regularly did their own stunts and in the case of say Keaton, Tom Mix or Douglas Fairbanks, it was their forte, and a key part of their appeal. In John Wick 2, the stunts are the whole ballgame, which in itself is not very unusual – it’s just they are particularly well done, and not (too often) cheated with CGI. The combination of artillery skills, combat and judo is something the makers of the film have named “gun fu” – everything is a brand these days, especially action franchises. In promoting this film, as he has done since The Matrix (1999) as far as I can tell, Reeves has emphasised how much stunt work, and stunt training, he did himself. You can watch videos online of Reeves in the dojo and at the firing range.

It’s hard not to think about The Matrix when watching John Wick 2, actually – especially when Laurence Fishburne makes an appearance. That film, in which Stahelski doubled for many of Reeves’s stunts, certainly wasn’t trying to evoke anything antique. However, I’ve long thought that the elasticity of the physical world in The Matrix, the rippling skyscrapers and every minute of the astonishing helicopter sequence, was very Keatonesque. I reckon Keaton would have loved to pick missiles out of the air too, and his motto “think fast, act slow” is surely the essence of “bullet time”.

Wick is almost as bulletproof as Neo, or the heroes of silent comedy, but for an altogether much more prosaic reason … which I’ll leave you to find out. In the end, the reason that the silent-movie comparison doesn’t quite hold for John Wick 2 is that the killings are so fast, so brutal and so frequent, that it takes all the fun out of the gun ballet. The fun that we were promised by that cheeky Keaton cameo. Modern guns are a real problem for silent comedy – their slick efficiency isn’t humorous in the slightest. See Keaton’s hapless gun control in The General or The High Sign as evidence of the opposite being true. Sure, the assassins that try to take a pop at Wick collapse like Keystone Kops, but they are usually bleeding from their ears as they do so. John Wick shoots people between breaths; he shoots them while they are already dying. He can, and will, kill people with a pencil, and I reckon Keaton, Chaplin and Lloyd would get a kick out of that ingenuity, even if they would flinch at the mess it makes.

There is a far more serious reason to be way of the gun fetishism in John Wick 2, which this piece in the Guardian expresses perfectly. But as well as glamorising violence, all those bullets tend to kill the joke.

* This isn’t a silent movie reference, but you should know how my mind works – when the scene shifts to New York’s Lincoln Center, I smiled to see that Alban Berg’s Lulu was playing at the Metropolitan Opera.