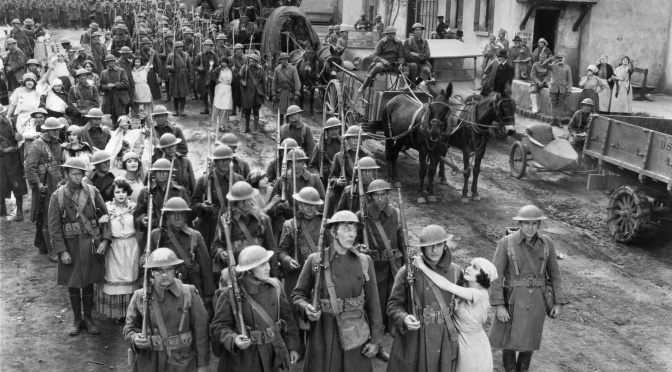 This is a guest post for Silent London by Neil Brand, writer, composer, silent film accompanist and TV and radio presenter. The Big Parade screens at BFI Southbank on 2 February 2020 with musical accompaniment by Neil Brand and an introduction by author Michael Hammond.

In 2006 my wife and I experienced a very personal, very deep loss. Happy events since have well overtaken the pain it involved, but it occurred just as I was about to leave to play for the Giornate del Cinema Muto in Sacile and I had to delay my arrival there until the Monday. Two days later I played The Big Parade. It was last thing on a midweek night, I had asked for the gig and nobody, least of all me, was expecting anything special.

The morning after, as I looked back in horror at what I can only describe as a traumatic experience, I felt that I had to write a document that could be given to the audience at that screening, explaining a few things. With the permission and profound support of my pianist colleagues, and particularly Giornate director David Robinson, I wrote this… END_OF_DOCUMENT_TOKEN_TO_BE_REPLACED 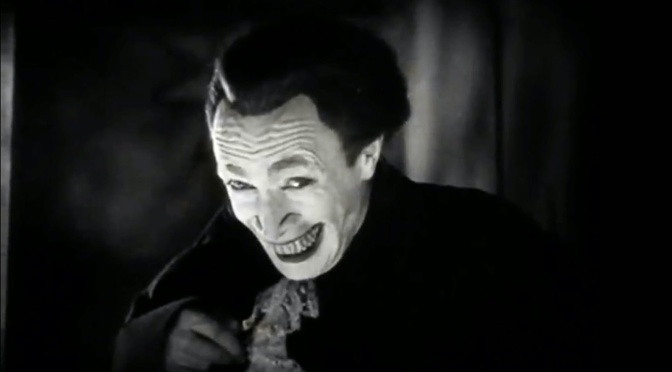 You may have noticed, due to the onslaught of thinkpieces and angry debate, that Todd Phillips’s Joker is released this weekend. This controversial film, starring Joaquin Phoenix, is a kind of origin story for the Batman villain of the same name.

Regular readers of this site, or anyone who has seen the trailer, may be aware that there is a little nod to silent cinema in this movie. So in honour of Joker and his famous grin, let’s count down the 10 most sinister smiles in silent cinema. Please don’t have nightmares.

This shouldn’t really be so creepy but it most certainly is. Charley Chase’s plastic surgery comedy Mighty Like a Moose imagines what a dog would look like wearing false teeth. Dear lord above this image is not for the faint-hearted.

The Laughing Jester in Blackmail

Hitchcock transfers culpability back and forth in this late silent’s tale of rape, revenge and retribution. But who’s bearing witness to all this human misery? The scoundrel artist’s icky painting of a court clown yucking it up – and pointing the finger of guilt. END_OF_DOCUMENT_TOKEN_TO_BE_REPLACED 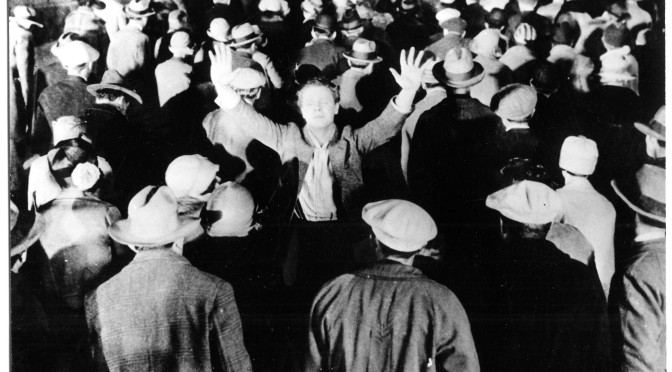 The Brits are coming! Where have I heard that before? Hmmm… Anyway, it seems there is a UK invasion of Pordenone this year, with what looks like a bigger than usual home crowd in attendance already. And a British movie on the first day! After a journey that involved a plane, a train, an automobile, and a bus, I am part of that merry band. Jubilations, I even made it into the Verdi for the first film of the festival, which doesn’t always happen.

And that film was … 3 Days to Live (Tom Gibson, 1924). This was a pacey, if hokey melodrama, hinging on some awful foreign types manipulating the stock market in San Francisco and driving good men to suicide. Yes, it was not very 2017. It was more like 1917, or earlier, racial politics wise (see 1915’s The Cheat, for example), and definitely not a classic, though it had effective moments. A series of three closeups of a woman’s tapping feet, twisting hands and mobile face when she was waiting for her boyfriend to ask her father that question, was one. Another was a set of dissolves between empty rooms in an abandoned house. In such highlights we might detect the hand of youthful assistant director, editor and title writer Frank Capra. Or perhaps not – will we ever know?

I had to miss most of a package of early French Westerns. Yes, French Westerns. Just when you think you have seen it all … I did see Le Revolver Matrimonial (Jean Durand, 1912) thought. This was sweet ersatz Americana trifle in which Arizona Bill woos wealthy Maud (un homme in drag) and must lasso a sympathetic pastor to seal the union. There’s romance for you.

The Scapegrace (Edwin J Collins, 1913) finished the set. This was a British two-reeler though, and I expected Brian Aherne on his hobby horse a la Shooting Stars, but realism prevailed, to a point. This was a sprightly if slightly directionless drama in which black sheep Jack flees to the Yukon to escape his gambling debts and mend his ways. He finds, gold, a girl and forgiveness from his father so all’s well that ends, you know. And The Scapegrace was a Cricks studio production so that makes Croydon the wild frontier … I guess.