No pressure guys. The East End Film Festival‘s “sonic cinema” screenings have won the, ahem, coveted Silent London poll first prize not once, but twice. And this year, the festival is going off-piste with an evening called A City Without a Voice. The free screening will feature a modern silent film from Argentina, a live “gothic pop” score – and an “immersive” contemporary dance performance. If the prospect of all that doesn’t get your senses tingling, then quite frankly you may as well stay at home and watch Millionaire.
First, the film: La Antena (2007) is a visually delirious modern almost-silent film, a fantasy about a city in reduced to silence after the residents’ voices have been stolen by an evil capitalist villain. The intertitles dance across the screen, becoming almost physical objects, and the film’s imagery is explosively ineventive, combining silhouettes, surrealism and a heavy debt to the cinema of Fritz Lang. You can read more about this fantastic film in a post that the fashion and film historian Amber Jane Butchart wrote for Silent London.
As for the music, Esben and the Witch, who will provide the score, are a three-piece from Brighton, named for a Danish fairytale. The NME described them as “gothic but not goth”, and many of the songs on their new album are inspired by literature: from Vladimir Nabokov to Robert Frost. Here’s a taster of their music:
The visual performance comes courtesy of Neon Dance, who will persent their immersive piece The Intention, inspired by an Argentinian novel. You can read more and watch rehearsal footage here.
Over to the festival themselves to set the scene for the screening:

La Antena is screening as EEFF 2013′s free outdoor screening, soundtracked by a specially commissioned score by Esben and the Witch. Setting the scene for Esben and the Witch’s atmospheric performance, the London premiere of contemporary dance piece The Intention, performed by East London dance company Neon Dance, will be led by world-renowned choreographer Adrienne Hart. Inspired by ‘The Invention of Morel’, a novel by Adolfo Bioy Casares, ‘The Intention’ explores a world of disjointed presences; where the playback of a recording of events takes on a greater reality than the continued existence of its subjects.
A City Without A Voice is set to be a festival highlight and there are limited seats available, so bring your cushion and grab a front row seat for this unmissable event.

A City Without a Voice takes place at 8.30pm on Saturday 6 July 2013 in Old Spitalfields Market as part of the East End Film Festival. Arrive early to get a good seat and wrap up warm. Read more and book tickets here. 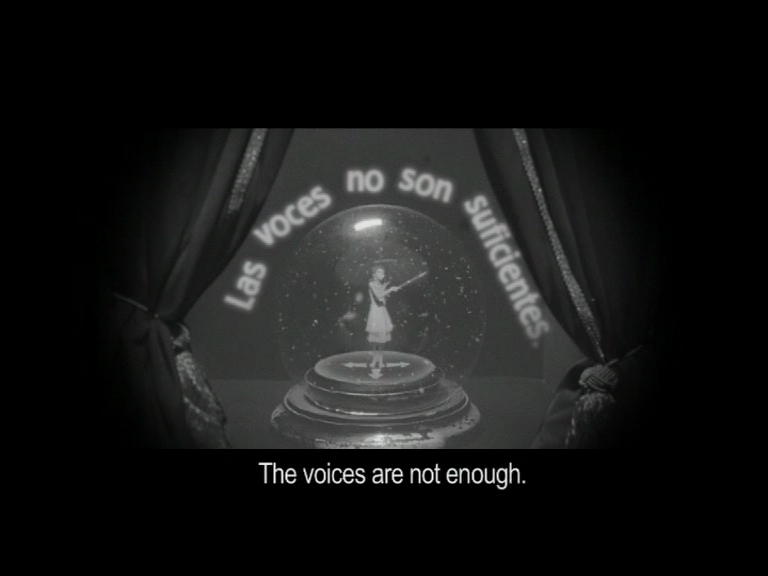 This is a guest post for Silent London by Amber Butchart, author of Theatre of Fashion

“[Talkies] are spoiling the oldest art in the world – the art of pantomime. They are ruining the great beauty of silence.”  –  Charlie Chaplin to Motion Picture Magazine, 1929

The phenomenal success of The Artist has sparked an understandable resurgence of interest in silent film. The success at the Baftas and the Golden Globes was a foreshadow of last night’s Oscar triumph, where the film bagged, as hoped, statuettes for best picture, director, actor, costume and score. A number of projects have developed in recent years that disregard dialogue in the quest to tell a story, from Silent Life – a silent film about Valentino currently in post-production, to a Charlie Chaplin musical set to open on Broadway this year and Louis, a silent film about Louis Armstrong complete with live score that had its European premiere last year at the Barbican. This interest, reductively dubbed the rise of ‘Retrovision’ by the Guardian, is more than just a passing fad. Creating silent films in a post-silent era, while unusual, isn’t unique: from Chaplin in the 30s to Jacques Tati in the 50s and Mel Brooks in the 70s, many directors have embraced the challenges of creating a narrative based on images rather than speech. It’s often the lament of film composers that their work is considered successful only when the audience is oblivious to it; when it forms such a seamless continuity between emotion and story that the viewer barely notices it’s there. But with ‘Soundies’ – films that have synchronised music and sound effects, but limited speech, the sound paradoxically reaches an elevated level. In fact, such ‘Soundies’ often use their score as a fundamental part of the narrative in a more progressive and successful way than most regular films, and the sound itself becomes a character in the action. In celebration of The Artist’s Oscar success, here’s an introduction to a few of my favourite post-silent-era silent films.

At the core of the narrative of The Artist is the issue of sound itself; the seminal point in Hollywood history where film transitioned from silents to talkies. Hollywood itself has long been enamoured with this era, and classics such as Singin’ in the Rain (1952) and Sunset Boulevard (1950) have both helped to mythologise this process. The descent of silent stars as talkies were developed has become part of Hollywood folklore, but in reality it was more often the case that moguls used the coming of sound to renegotiate or break contracts with stars they wanted to lose – it was used as as a purging process to usher in fresh meat for cinema audiences.