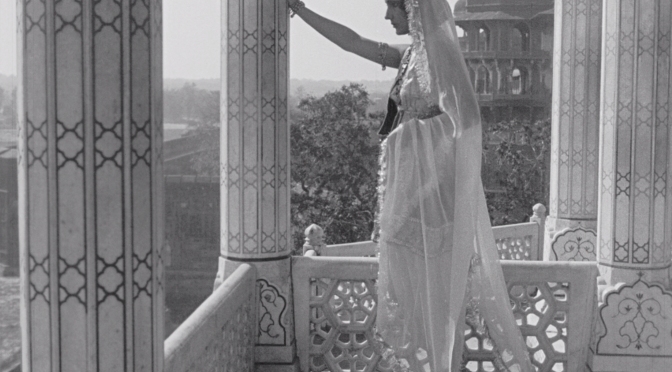 Saturday night’s London Film Festival Archive Gala was an extraordinary experience. Regularly a highlight of the silent film year, previous galas have showcased glistening restorations of old and faded movies paired with fresh scores of mostly excellent quality. This year’s event was an exercise in enchanted restoration – with makeover and music transforming a simple film into something entirely wonderful.

Shiraz: A Romance of India was an Indian/British/German co-production from the late silent era. You might know two more films by the director Franz Osten: A Throw of Dice and Light of Asia. Shiraz is a shamelessly romantic and fairly romanticised, telling of the love affair honoured by one the most beautiful mausoleum in the world, the Taj Mahal in Agra.

Shiraz (Himansu Rai, who also produced the film) is a humble, but exceptionally talented potter, who has a deep love for his adopted sister Selima. When Selima (Enakshi Rama Rau) grows up, she is sold as a slave into the royal court and they are separated. What’s more, a love affair slowly begins to spark between Selima and Prince Khurram (Charu Roy) … Meanwhile, general’s daughter Dalia (Seeta Devi) is plotting to get her own hands on the prince.

The story may seem paper-thin, but it has a beautiful surface. The romantic leads are very sweet, with the halting love story between Selima and the Prince always believable and Devi delightfully minxy. The location backdrops of the mountains and palaces are ravishing – a testament to the art direction of Promode Nath and cinematography by Henry Harris and Emil Schünemann that makes the most of natural light.