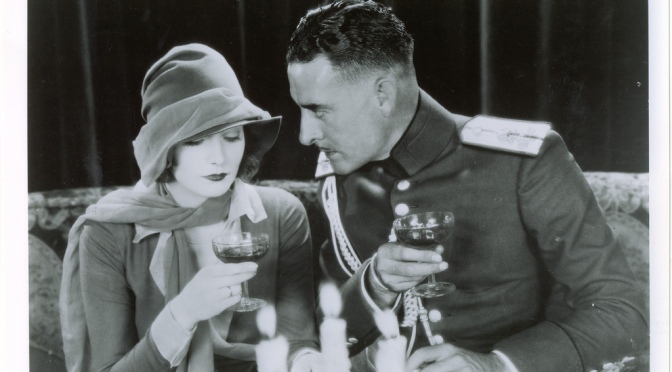 War and Peace is nearly at an end (the raunchy BBC TV adaptation, that is). But don’t despair – Tolstoy up your life with Greta Garbo and John Gilbert. Hollywood’s hottest ever on-screen couple ™ starred in the sumptuous Anna Karenina adaptation Love (Edmund Goulding, 1927), which is showing at the Royal Festival Hall this month.

Yes, the Royal Festival Hall – with the Philharmonia orchestra (featuring violinist Vadim Repin) playing a brand new score for the film written by Aphrodite Raickopoulou. You may remember that she wrote a very lush, romantic score for a similarly grand screening of Faust a few years back.

The even better news is that tickets for this event now begin at £5 – which is unbeatable value really. This screening is the premiere of the new score and will kick off the 2016 UK-Russia Year of Language and Literature here in London. The film and score will then embark on a world tour, taking in Russia, Japan and South Korea. But you’ll see it here first in London.

Love, a Carmen Zgouras production, screens at the Royal Festival Hall on Thursday 25 February 2016 at 7.30pm.

Love makes gluttons of us all. So if you enjoyed Love Is All, Kim Longinotto’s romantic sweep through the film archives at the cinema, you may be toying with picking up the DVD also. Then again, there are so many great clips from brilliant films, both popular and obscure, in Love is All that it might have prompted you to buy several other DVDs instead.

Love is All sprawls across the history of cinema, picking up clips from classic films and home movie so the and editing them together into a gorgeous mess of love and romance. It contains flirtations, seductions, marriages and babies; young love, forbidden love, gay love and straight. It leans quite heavily on silent cinema, possibly because those films work particularly well in this treatment, possibly because they are just the most romantic. Who knows? And the whole thing is set to a gruffly melancholic soundtrack of songs by Richard Hawley. So it’s really rather eye-catching, but could be a head-scratcher too. What does it all mean?

This DVD release from the BFI does attempt to reveal the mysteries of this swooping documentary, with a package of extras including explanatory essays and statements from the film-makers, plus a bundle of complete short silent films from the archive. There is also a recorded Q&A with Longinotto in which she happily admits that she had never heard of Hindle Wakes or Anna May Wong before including them in Love is All. Yes, really.

END_OF_DOCUMENT_TOKEN_TO_BE_REPLACED

As the nights draw in, the BFI is offering something to keep us warm and purring with satisfaction. The institute’s blockbuster season for 2015 is Love, a celebration of everything sexy, sentimental and swooningly romantic. It’s a capacious theme, but a winning one. For myself, I am never happier than when I am sobbing my heart out at an old film.

You’ll be glad to hear, however, that I managed to restrain myself on Tuesday morning, at the official press launch for the season, which offered a whirlwind romance with the history of love on screen, from GA Smith’s A Kiss in the Tunnel (1899) to Brief Encounter (1945) to Trainwreck (2015). The BFI’s Rhidian Davis gave the presentation, which was a real joy, but his love train hit a bump when he arrived at the modern romcom. Judd Apatow’s growing influence over the genre was, he said, as if the little boys who wince when film stars start kissing are now directing the love scenes themselves. Modern romance is drowning in irony, and Seth Rogen is no Hugh Grant, he lamented.

That sounds about right – but I hope it’s not true. Perhaps this is just nostalgia, I thought, crossing my fingers. Maybe we never get over our first screen crushes, or could it be that old age knocks the corners off our screen romances, making vintage affairs seem more universal? Romance has been declared dead before, in fact. I have written a chapter for the BFI Love compendium, all about romantic films in the silent era – and believe me, at the dawn of the 1930s, plenty of critics believed that synchronised sound had murdered the art of love on screen.

The question that really made me channel my inner Carrie Bradshaw, with a winsome tilt of the head as I pushed open my laptop, arose at the Q&A afterwards. Jenni Murray was the chair, and her panellists perched on Mae West pout sofas were the BFI’s Davis and Laura Adams, director Mike Newell and screenwriter Tess Morris. It was Murray I think, who asked: where are the new Valentinos? The panel was stumped. Do we even, they pondered, need Rudolph Valentino any more?

For many a silent film fan, that’s a terrible question. Who could live without Valentino? Who would want to? Certainly, when he died young, hundreds of young women famously felt unable to carry on. For many a cinephile full-stop, the thought of a world without a Valentino figure is a glimpse of a hideously barren future. If we agree that the cinema taps into our collective subconscious, then where would our dreams be without a dream lover? Won’t anyone ever seduce us, and leave us breathless again?
END_OF_DOCUMENT_TOKEN_TO_BE_REPLACED

So, yesterday I spent the afternoon in the cinema watching 18 movies. Jealous, right? I was lucky enough to be part of the judging panel for the Walthamstow International Film Festival and we were watching the shortlisted works in order to hand out some prizes. It’s a fun job, and a great local festival that I am chuffed to be a tiny part of. All the entries are around five minutes or less, and while the festival encourages local film-makers, particularly young people, it is open to all, and this year we saw films from as far away as Australia, Argentina and Hong Kong. Our overall winner was the fantastically moving, and intriguing, Speed by Jessica Bishop – a film that interrogates the grieving process by counterpointing family photos and voices. A worthy winner indeed.

END_OF_DOCUMENT_TOKEN_TO_BE_REPLACED

Love is private, intimate. Speak its name aloud and the spell is broken. Share it and the magic is shattered. Except, except … in the 20th century popular culture crashed into the space between lovers, the gap between two pairs of moist lips, the air that thrummed to their heartbeats. Pop music ran away with love, spinning out each precious moment of desire or sorrow for three minutes of passion and repetitive heartbeats. But the movies, arguably, got straight to the dirty bits first. In the dark of a cinema, that is to say a tent or a grubby room, crammed next to a sweetheart or a maybe-sweetheart in the dark, we could watch actors (imagine!) play-act the the motions of love: smooches in train carriages, swoons on the hearth. Illicit affairs, happy marriages, flings, crushes … all the joy and misery of human existence on the screen. And in the cheap seats (they were all cheap), a fumble, a fondle, a kiss or maybe more. And did I mention it was dark? A private act in a public place – disapproval be damned.

Kim Longinotto knows exactly what goes on in the dusky darkness of the Odeon. Her new collage film Love is All (2014) is a super-cut of romance: sexy, sedate or seditious. It’s a full-tilt rush for the hormones, soundtracked by the grizzled, tender love songs of Sheffield music legend Richard Hawley. Not strictly a silent film, this, but one in which the few fragments of dialogue are incidental, another instrument in the orchestra. Hawley sings what is on our lovers’ minds – what they actually have to to say is rather beside the point.

END_OF_DOCUMENT_TOKEN_TO_BE_REPLACED

Nothing could be more romantic on this cupid-blessed, rose-scented day than to draw the curtains, light the candles, snuggle your loved one close and watch a film  – a silent film,  that is. Silent movies have more romance about them than their dialogue-laden counterparts. These films drip with intense, unspoken passion; those lingering closeups of limpid eyes speak directly to our emotions; and, of course, everyone looks sexier in black and white.

So, this Valentine’s morn, I asked the Silent London Twitter followers, a wise bunch, which films they would select for a night of silent seduction:

Any favourite #silentfilm suggestions for Valentine's Day? I think ONE WEEK is quite romantic. Or do you prefer, say, SEVENTH HEAVEN?

And I got replies, lots of them. You can see them all on this link, but here are some highlights:

@silentlondon a Girl In Every Port for the bromantics amongst us.

@silentlondon I'll go for Lonesome, minus the talking bits.

Robin calls himself “bitter” but I couldn’t possibly comment

@silentlondon Foolish Wives. Although that may be because I'm single and bitter.

Robert plumps for The Phantom of the Opera

Ian is clearly something of a cynic:

And there were two votes for The Cameraman

@bergersmicer @silentlondon "It was worth it to be near you."

Other votes went to Sunrise, City Lights, Underground, The Lodger (from another, er, sceptic).

So, what’s your perfect silent Valentine’s movie? And do you agree with me that talkies just aren’t quite the same when it comes to the lovey-dovey stuff? Let me know in the comments below: