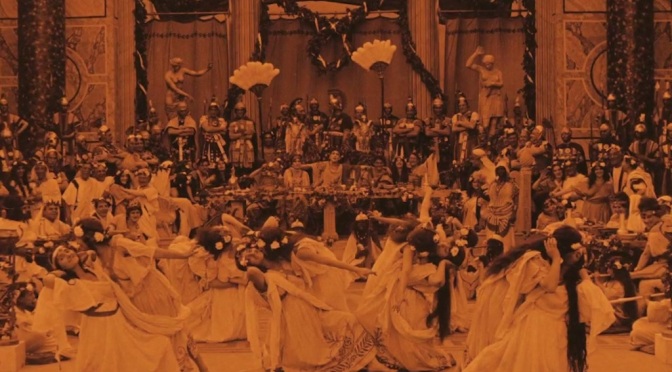 This is a guest blog for Silent London by Maria Wyke, professor of Latin at University College London.

Recently I came across a silent short in the archives of the US Library of Congress that displays the eruption of Vesuvius in 1906. It was the first time the destructive volcano had been captured in moving images. But what caught my attention even more than that was how the (as yet unidentified) Italian filmmaker had juxtaposed scenes of destroyed buildings and dead bodies in the local towns with shots of tourists serenely visiting the ancient city of Pompeii – as if to accuse the elegant visitors of preferring to look at the pretty ruins of the past instead of helping overcome present suffering. I’ve managed to got hold of a digital copy of the film and now you too can see it alongside three other rarely seen silents about the classical world (including a recently restored feature about the emperor Caligula, about which more below).

The screening takes place at the Bloomsbury Theatre, on Saturday 6 July, 7.30 to 10pm. Tickets are £12 and available from the Bloomsbury Box office. Live accompaniment will be provided by Stephen Horne, whose impressive performances have won several Silent London awards.

Silent cinema delivers a democratic take on the classical world. That’s one theme that emerges from across the films I’ll be screening. From Filmarchiv Austria comes a Pathé travelogue, An Excursion in Ancient Greece (1913), that follows its well-dressed sightseers along the Corinthian canal to view various celebrated monuments on and around the Acropolis. Distributed worldwide, the short rescues ancient Greece from its associations with high culture and moneyed tourism and offers its spectators the opportunity to visit sites affordably from the comfort of their local picture house. END_OF_DOCUMENT_TOKEN_TO_BE_REPLACED