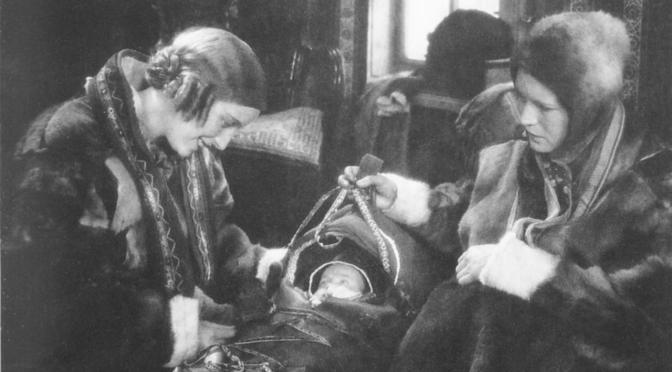 This is an edited version of the screening notes I wrote for the screening of Laila at the Hippodrome Silent Film Festival 2019. That screening was accompanied by a spellbinding score by Rona Wilkie and Märit Falt, commissioned by Hippfest, which will be touring Scottish venues with the film in the coming months – more details below.

George Schnéevoigt was born in Copenhagen in 1893. His Danish father was a musician and his Finnish mother was a photographer. He lived with her in Berlin for much of childhood, before returning to Denmark as a young man to become a filmmaker. As a director at the Nordisk studio, he directed several films, but he also worked as a cinematographer, most notably on some beautiful films by Carl Th. Dreyer (The Parson’s Widow and Leaves from Satan’s Book, both 1920). It was when working as a cinematographer on a film called The People of the Wilds (1928), a melodrama set in the Sami community in northern Norway, that he was struck by the inspiration for his Laila (1929).

With the help of Norwegian producer Helge Lunde, Schnéevoigt was able to make Laila, an adaptation of a popular novel about the Sami people by author J. A. Friis. At the time, the indigenous Sami people, who lived in Norway, Sweden, Finland and Russia, were the targets of a certain amount of racial prejudice – traces of which you can see in the finished film. Nevertheless, Friis’s novel took a slightly more sympathetic view, and had proved a big success. It had first been written as individual stories under the title From Finnmark: Descriptions, but Friis added more chapters to create a cohesive novel named Lajla, using the adventures of a young woman to tie the story together. END_OF_DOCUMENT_TOKEN_TO_BE_REPLACED