Greetings from Cinema Rediscovered in Bristol – the fabulous west country weekend inspired by a certain Bolognese festival of archive cinema. I am here to work a little and watch a lot – or that’s the plan. If you haven’t made it to this annual event (and this is the third instalment, so why not?) do try to rectify that next year. Bristol is a lovely place to be at the end of July and it’s a warm and wide-ranging festival too, based mostly at the fantastic Watershed cinema on the harbourside.

While I am here, I really must share some more festival news with you, because I have lots. First, because we’re in Bristol, but also last, as it is not until next year, I have Slapstick news. The Slapstick Festival is going ahead for 2019, but as the Colston Hall is closed for refurbishments, a few changes have been made to the setup. The festival will go ahead as usual 18-20 January at the Watershed and the Bristol Old Vic. The Gala screening of Modern Times will become a standalone event and take place at the beautiful Hippodrome Theatre on 10 February instead. Here are the details:

Hosting the event will be stand-up, TV and radio show panellist, writer, satirist and actor Marcus Brigstocke. Its centrepiece will be a complete screening of the Charlie Chaplin masterpiece Modern Times (1936), showing on a super-sized HD screen and accompanied live by the 40-piece Bristol Ensemble playing Chaplin’s own score for the film and conducted by Guenter A Buchwald.

In addition, there will be pre-show entertainment by students of the Circomedia circus-theatre school; screenings, with music, of Bacon Grabbers (1929), starring Laurel & Hardy, and Buster Keaton’s The Scarecrow (1924) and comedy magic from John Archer – the first act on Jonathan Ross’s Penn and Teller: More Fool Us series to perform a trick which left the duo baffled and a regular on the BAFTA-winning CBBC series Help! My Supply Teacher’s Magic.

You can book your seat for the Modern Times gala now on the Slapstick website. And keep your eye on that site too, as the full programme for the festival should be announced in October.

END_OF_DOCUMENT_TOKEN_TO_BE_REPLACED 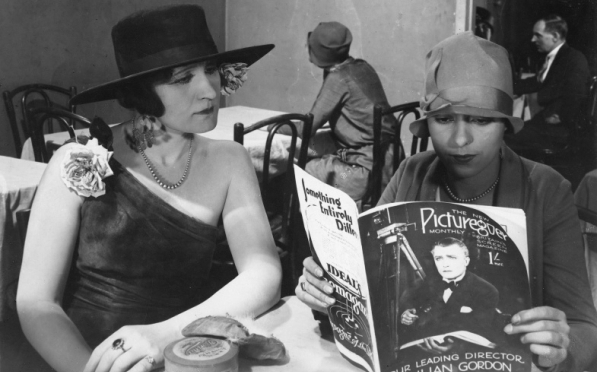 Competition time! And this time I am giving away three pairs of tickets for some silent movie screenings at one of London’s most atmospheric venues. The team at the Lucky Dog Picturehouse have teamed up with Wilton’s Music Hall, a historical theatre in the east end of London, to put on four nights of silent cinema and live music.

The Lucky Dog Picturehouse is dedicated to recreating the original cinema experience, bringing together classic silent films and live, period specific music. Working with some of the best young musicians in London, they have performed at numerous venues including the BFI Southbank, LoCo Film Festival, Hackney Picturehouse, Standon Calling festival and Abney Park’s outdoor cinema series. The Lucky Dog Picturehouse also run a series of educational programmes introducing silent film to children in a fun and interactive way.

To win a pair of tickets for one of these screenings, just send the answer to this question to silentlondontickets@gmail.com by midnight on 7 August 2017 – and don’t forget to let me know which film you’d like to see.

What is the name of the cowboy star played by Brian Aherne in Shooting Stars?

Good luck! The winner be chosen at random from the correct answers and will be notified by email.

The 2012 Olympics are not just about sport. The London 2012 Festival will bring hundreds of cultural events to the capital as well. Music, dance, art and literature all get a look-in, but of course, the strand that really catches my eye is The Genius of Hitchcock. The sound films of Leytonstone’s favourite son will be shown at a complete retrospective at the BFI in August, September and October 2012. Before that, and more importantly, Hitchcock’s wonderful silent films – all nine that survive – are in the process of being restored by the BFI, and will be screened across London next summer, with live, specially commissioned scores. These special events will be must-sees for silent film fans, so I’ll be keeping you updated as the tickets go on sale.

The exciting news for readers outside London is that The Lodger will also receive a theatrical release – and the performances of The Ring and Champagne will be streamed live online too.

The first screenings have now been announced, and you can even start booking tickets. I will update this post as more details and dates are announced

Watch this space, Hitchcock fans. And don’t forget, you can still donate to support the restoration of Hitchcock’s silent films: