Greetings from Cinema Rediscovered in Bristol – the fabulous west country weekend inspired by a certain Bolognese festival of archive cinema. I am here to work a little and watch a lot – or that’s the plan. If you haven’t made it to this annual event (and this is the third instalment, so why not?) do try to rectify that next year. Bristol is a lovely place to be at the end of July and it’s a warm and wide-ranging festival too, based mostly at the fantastic Watershed cinema on the harbourside.

While I am here, I really must share some more festival news with you, because I have lots. First, because we’re in Bristol, but also last, as it is not until next year, I have Slapstick news. The Slapstick Festival is going ahead for 2019, but as the Colston Hall is closed for refurbishments, a few changes have been made to the setup. The festival will go ahead as usual 18-20 January at the Watershed and the Bristol Old Vic. The Gala screening of Modern Times will become a standalone event and take place at the beautiful Hippodrome Theatre on 10 February instead. Here are the details:

Hosting the event will be stand-up, TV and radio show panellist, writer, satirist and actor Marcus Brigstocke. Its centrepiece will be a complete screening of the Charlie Chaplin masterpiece Modern Times (1936), showing on a super-sized HD screen and accompanied live by the 40-piece Bristol Ensemble playing Chaplin’s own score for the film and conducted by Guenter A Buchwald.

In addition, there will be pre-show entertainment by students of the Circomedia circus-theatre school; screenings, with music, of Bacon Grabbers (1929), starring Laurel & Hardy, and Buster Keaton’s The Scarecrow (1924) and comedy magic from John Archer – the first act on Jonathan Ross’s Penn and Teller: More Fool Us series to perform a trick which left the duo baffled and a regular on the BAFTA-winning CBBC series Help! My Supply Teacher’s Magic.

You can book your seat for the Modern Times gala now on the Slapstick website. And keep your eye on that site too, as the full programme for the festival should be announced in October.

More silent comedy is coming up back in London, and much sooner. The Pie Face silent comedy festival will be at the stunning Wilton’s Music Hall in August, with classic short films and music from the Lucky Dog Picturehouse musicians. Here’s the lineup:

These events should be wonderful, as Wilton’s is one of the most atmospheric venues in London, and the people from The Lucky Dog Picturehouse have an infectious passion for silent cinema.

Another of our favourites, the Kennington Bioscope, continue to screen hard to see silent films on the regular, down at the Cinema Museum, but these people also have a festival coming up. The Fourth Kennington Bioscope Weekend Festival takes place on 8 and 9 September, and the full, mouthwatering lineup is posted on the website already. Sparrows! Rin Tin Tin! Guy Newall and Ivy Duke! Constance Talmadge! Pearl White! Turksib! Maurice Elvey! The Golden Butterfly! There are some amazing films in this programme, and the music is guaranteed to impress. You may have noticed, incidentally, that there is no British Silent Film Festival this year, but those good people have collaborated with the Bioscope on some of these screenings, so we needn’t be entirely bereft. 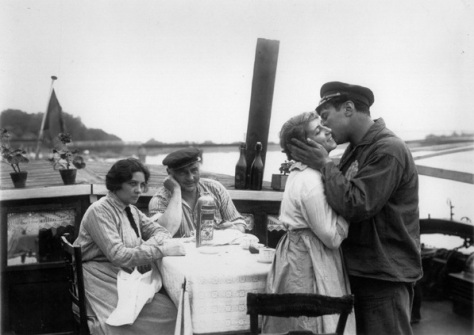 Before I crack on with my final titbit, may I draw your attention to a couple of screenings at the Barbican, including the gorgeous The Swallow and the Titmouse, with a brilliant live score by Stephen Horne and Elizabeth-Jane Baldry, which premiered at last year’s BSFF, and The City Without Jews, screening with a new score by Olga Neuwirth.

And back in the Bristol region, the autumn programme from South West Silents is pretty spectacular. Check it out on the SWS website.

And now for the biggie. The Pordenone Silent Film Festival (6-13 October) has announced its opening and closing galas, and its midweek special event. The Giornate will kick out with Captain Salvation (John S Robertson, 1927), with an orchestral score written by Philip Carli, no less. The midweek special is Mario Bonnard’s I Promessi Sposi (1922), and the week will close with the mesmerizing epic The Chess Player (Raymond Bernard, 1927), as part of the festival’s birthday tribute to Kevin Brownlow.

Not only that. Not only that, but the complete lineup (it seems) for the festival has been posted on the Giornate site already – read all about it. Posting the films (no dates yet apart from the galas) so early is unprecedented I think. I am especially psyched about the silent Stahl programme (of course), the restoration of Lubitsch’s Forbidden Paradise starring Pola Negri, Balzac adaptations, more John Collins and some very tempting Scandinavian films. I have been hearing some wild things about the Mario Bonnard strand too. Dig in and explore!

If you have registered to attend the festival, you have probably had an email from them by now. If not, you can still register here. Seriously, this does look like an especially good selection, especially for a first-timer – it’s an eclectic but accessible collection of films, so if you have never Pordenoned before, it may be time to dip your toes in the water in 2018. Believe me, it’s a wonderful escape from the real world, and we all need that right now.

3 thoughts on “A feast of festival news: London, Bristol and Pordenone”