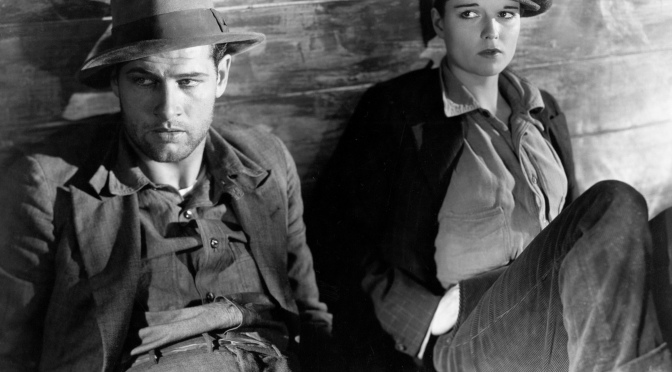 Nobody knows more about Louise Brooks than Thomas Gladysz. Having founded the Louise Brooks Society in 1995, he has spent more than two decades researching her life and work, curating memorabilia and writing about this most fascinating of silent era actresses. A few years back he published a sumptuous illustrated edition of the novel that Brooks’s second German film, Diary of a Lost Girl (G. W. Pabst, 1929) was based on, and he has contributed audio commentaries to American DVDs of that film, and her finest Hollywood movie, Beggars of Life (William Wellman, 1928).

Which brings us up to date with Gladysz’s latest publication – a short book about the Wellman film, packed with anecdotes and information. Beggars of Life: A Companion to the 1928 Film is a quick, satisfying read, illustrated with promotional material, posters and stills as well as press clippings. In these pages, Gladysz takes us through the making and the reception of the film and clears up a few mysteries too.

The film, which you may have been lucky enough to see accompanied by a live score from the fabulous Dodge Brothers, features Brooks as an orphan fugitive, dressed as a boy and riding the rails with a handsome tramp played by Richard Arlen and a gang of his peers, including the the menacing Oklahoma Red, played by Wallace Beery. It’s adapted from a famous book by “hobo author” Jim Tully, and although it was a little sanitised by Hollywood, it’s still a remarkably raw, realist film. Not least of its strengths is that Brooks here gives an excellent performance as a survivor of sexual abuse, as she would in her two Pabst films, drawing perhaps on her own experiences as a child.

Beggars of Life has survived as a silent film, but it was released with sound – in fact it was on this set that the first boom mic was improvised – but it has never been very clear to me exactly how much dialogue, music and sound effects was included in this first release. Gladysz has trawled through the reviews to provide an answer, and even includes the full lyric sheet for the song that Wallace Beery sings on camera: “My girl is very fascinating/I don’t believe it over-rating.”

It was a tense set, with relations between Brooks and the mostly male crew simmering just below outright hostility and Gladysz has also sorted through a selection of memoirs to find out exactly where the battle lines were drawn. He also delves into some of the more obscure elements of the film – there is plenty of detail here on the true star of the picture, the hulking locomotive that transports the hoboes across country.

There is also lots to read here on “race star” and former boxer and baseball player Edgar “Blue” Washington who plays a hobo called Black Mose. In The Afro-American his role was lauded as “hardly less important to the epic of tramp life than those of Wallace Beery, Louise Brooks and Richard Arlen”. That’s a telling snippet about the paucity of opportunities available to actors of colour in 1920s Hollywood. Washington appeared in 74 movies between 1919 and 1961, but his place in the tramp chorus of Beggars of Life would remain one of his most significant roles.

Beggars of Life is a fascinating movie, made by some of the silent film industry’s most colourful characters. This highly readable book will deepen your enjoyment and understanding of a silent Hollywood classic.

One thought on “Beggars of Life: a Companion to the 1928 Film review – behind the scenes of a silent classic”