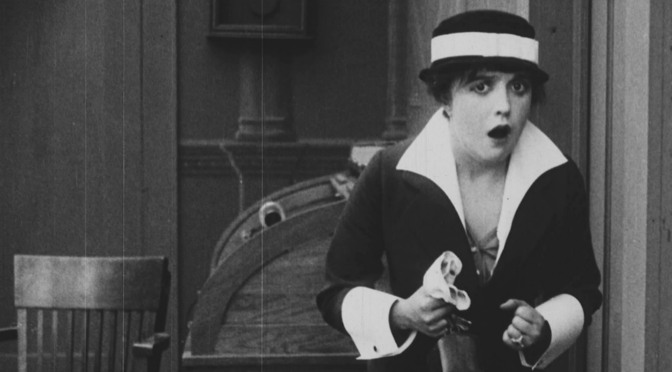 This article was originally published on the Drugstore Culture site on 23 November 2018. As that site is currently shuttered, I am reposting it here.

The career of Mabel Normand represents one of the biggest gaps in popular film history. Why isn’t this uproariously funny comic, who starred in more than 167 shorts and 23 features, remembered as one of the greats of silent comedy? Instead, there is a long-established male hierarchy in slapstick: Charlie Chaplin and Buster Keaton at the top, vying for the number one slot, with Laurel & Hardy and Harold Lloyd snapping at their heels. Then there’s Roscoe Arbuckle, Charlie Chase, Raymond Griffith and many more, cramming in to the picture like a cohort of bungling Keystone Cops. For years the top ranks have been pictured this way, as a boys-only club, with room only for comedians, not comediennes. In his 1975 slapstick bible The Silent Clowns, Walter Kerr even declared: ‘No comedienne ever became a truly important silent ﬁlm clown.’ The reason being, he argued, the beauty standards required of women in the film industry. ‘Comediennes, from Mabel Normand all the way to Marion Davies, laboured under an instant handicap: they had to be pretty… The girl was expected to function as a girl, no matter what incidental nonsense she might be capable of; grotesques need not apply, except for supporting roles.’

It’s a misperception that is finally shifting. A hundred years after the fact, it seems we are finally appreciating the contribution of women to the art of silent comedy, including many more great comediennes besides Normand and Davies. Recent books such as Steve Massa’s Slapstick Divas (2017) and Maggie Hennefeld’s Specters of Slapstick and Silent Film Comediennes (2018) are changing our idea of the comedy canon, and in the UK, screenings as part of the nationwide BFI Comedy Genius season and at the annual Slapstick Festival in Bristol should help to get the word out further. For the record, Marion Davies was deathlessly hilarious, squeezing acclaimed comic set pieces into the action of hit comedies including Show People (1928) and The Patsy (1964), and I would add to that list Marie Dressler, Beatrice Lillie, Colleen Moore, Alice Howell, Laura La Plante, Zasu Pitts and Mary Pickford, just for starters. If we go back further in time, a phalanx of rambunctious women were making boisterous comedies in the pre-Hollywood years: Cunégonde and Rosalie in France, Florence Turner, Laura Bayley and the ‘Tilly Girls’ in Britain. If you’ve been led to believe that women took only dramatic roles in silent cinema, take a second look at these comics, who were as comfortable falling, fighting and making a mess as any of their male counterparts.

END_OF_DOCUMENT_TOKEN_TO_BE_REPLACED

This is a guest post for Silent London by Alison Strauss, director of the Hippodrome Festival of Silent Cinema, Bo’ness. The Silents by Numbers strand celebrates some very personal top 10s by silent film enthusiasts and experts.

The moment when fun-loving flapper Joan Crawford launches herself on to the dance floor and sets the party alight with a high-tempo Charleston, ripping her skirt to a more liberating length as she goes.

The 45-second kaleidoscopic record of a vaudeville dance – created by pioneering dancer Loie Fuller – in which an anonymous performer elegantly whirls her arms in the long-flowing fabric of her costume to mesmerising effect, thanks to the immaculate hand-tinting work of the Lumiere Brothers’ army of finely skilled women behind the scenes.

Trained dancer and former Ziegfeld Follies girl, Louise Brooks is electrifying as Lulu, especially when, with all eyes on her, she takes to the floor at her own wedding with yet another admirer – a female guest – and the pair dance in a sexually charged vertical embrace.

The Four Horsemen of the Apocalypse (1921, Rex Ingram)

Another raunchy tango, this time with Rudolph Valentino in a sequence that launched him as a legend.  The woman in Julio’s arms submits to his overpowering masculinity in this iconic routine that set the standard for all subsequent movie tangos.

Stan Laurel is persuaded by Oliver Hardy to masquerade as his wife in order to secure the bequest of a rich uncle.  In one of the funniest sequences Stan, looking lovely in an evening gown, dances the two-step with Ollie in an effort to shimmy a stolen necklace down through his undergarments!