The Bologna suntans are fading but the Il Cinema Ritrovato memories are still vivid. So Peter Baran and I were delighted to be joined on our latest podcast by academic and film programmer Eloise Ross, as well as filmmaker Ian Mantgani and writer Philip Concannon from the Badlands Collective. We’re chatting about our highlights, discoveries and duds from the Il Cinema Ritrovato festival – a feast of archive, vintage and restored cinema, spanning silent and sound films.

The Silent London Podcast is also available on iTunes and Stitcher. If you like what you hear, please subscribe and leave a rating or review too. The podcast is presented in association with SOAS radio by Peter Baran and Pamela Hutchinson.

If you want to get in touch with us about anything you hear on the podcast then you can post a comment below, or tweet @silentlondon.

A few years back, when the world may not have been young but this blog certainly was, and I had begun to hit the silent film festival trail, I received some alarming advice from Neil Brand. “What you really want to do as well,” he said, “is to go to Bologna. The weather’s great, the food’s amazing – and there are even talkies, too.”

Well two out of three ain’t bad. By Bologna, Neil meant Il Cinema Ritrovato, a festival of archive cinema that takes place every summer. Ritrovato means something like rediscovered. So, fittingly this festival shows rediscovered films, but also rarely seen films, films on rare formats and vintage prints, and newly restored films too. Largely, anything more than thirty years old qualifies for the festival, which gives it a giant scope.

I knew lots of people who went to this festival, but as always with anything new, I was a little wary to dipping my toe in the water. Worst-case scenario – I might really enjoy it and develop an expensive habit. So, the first year I went for just three days, then I skipped the next year and was filled with regret. For the past three years running I have turned up for about five or six days, almost the whole thing. And every time I have had a ball. Great films, in vast quantities, and a celebratory atmosphere that is almost as warm as the Italian sunshine.

Are you pondering a trip to Bologna this summer? I know some Silent London readers are Ritrovato regulars, but for those who haven’t had the pleasure yet, here are some hints and tips for getting the most out of the festival (without breaking the bank). END_OF_DOCUMENT_TOKEN_TO_BE_REPLACED

I’m back from Bologna and joined in the podcast studio by Pete Baran and film writer Philip Concannon. We’re chatting about our highlights, discoveries and duds from the Il Cinema Ritrovato festival – a banquet of archive, vintage and restored cinema, spanning silent and sound films. 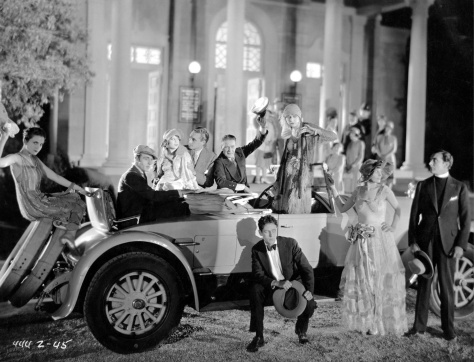 The Silent London Podcast is also available on iTunes and Stitcher. If you like what you hear, please subscribe and leave a rating or review too. The podcast is presented in association with SOAS radio by Peter Baran and Pamela Hutchinson.

If you want to get in touch with us about anything you hear on the podcast then you can post a comment below, or tweet @silentlondon.

Charlie Chaplin and Buster Keaton – the Beatles and the Rolling Stones of silent comedy. They say you have to pick one to love, but there is nothing to stop you admiring both. If you’re a Keaton devotee, though, you may have watched the progress of the Cineteca di Bologna’s Chaplin Project with green eyes. Though of course your expression will have been too deadpan to reveal your true feelings.

Over several years and many gala screenings, the Cineteca and the L’Immagine Ritrovata lab, working in collaboration with archives, labs and historians across the world, restored all of Chaplin’s works to the utmost technical standards. You can see the results of these labours in releases such as the recent Chaplin Mutuals Blu-ray, which really is worth adding to your Christmas list. Now it’s Buster’s turn. Using material from the Cohen Film Collection, the Keaton Project will set about buffing and shining all the silent shorts and features made by the Great Stoneface. It’s a mammoth task for the ladies and gents in the lab, but a massive treat for those of us who get to watch the finished films.

END_OF_DOCUMENT_TOKEN_TO_BE_REPLACED

Don’t tell me you missed the fact this year, this February in fact, we are celebrating 100 years of Charlie Chaplin’s Tramp. Kid Auto Races, Chaplin’s first screen appearance as the anarchic scruff, was released on 7 February 1914. It’s a cinematic centenary of the best kind – one that affords the opportunity for screenings of wonderful films and some clever-clever comment and analysis too. An event at the BFI Southbank on 4 February will add a little star power to proceedings, as well as some new insights into the Tramp and his creator.

At The Centenary of the Little Tramp David Robinson will be talking specifically about how Chaplin drew on the music hall tradition of his youth to create his signature character – and how those influences stayed with him and found a beautiful expression in the gorgeous 1952 film Limelight.

This special event marks the centenary of the birth of Charlie Chaplin’s ‘little tramp’. One hundred years ago this week the iconic character first stepped in front of the camera at the Keystone studios. David Robinson, Chaplin’s official biographer, presents his latest thoughts on Chaplin and the tramp and celebrates the launch of his new book ‘The World of Limelight,’ commissioned by the Cineteca di Bologna, which draws on previously unpublished material from the Chaplin Archive.

Robinson will be launching his book at the event and I think copies will be on sale after the talk with perhaps a booksigning too. A particularly well-informed little bird tells me that Chaplin’s co-star in Limelight, English actress Claire Bloom, will be in attendance also. In fact, Robinson’s book is dedicated to her. Here’s a little more about the book:

Limelight was first cast not as a film script, but as a long novella, Footlights, with the supplementary Calvero’s Story.  Both are here published for the very first time – the ultimate raison d’être of this volume.  Out of these Chaplin extracted a screenplay which passed through several drafts before being transferred to the screen.

The accompanying commentary in this volume explores the documentary reality of the world which Chaplin recreated from his memories and evoked for posterity – London, the music hall and ballet at the end of an era, the outbreak of the First World War.  The book is illustrated with images from the author’s own collection, and reproductions of documents and photographs from the Chaplin archives, which clearly depict the development  of the film LIMELIGHT that David Robinson so intricately describes.

The event takes place at 6.20pm in NFT3. For more details, see the event page on the BFI website.